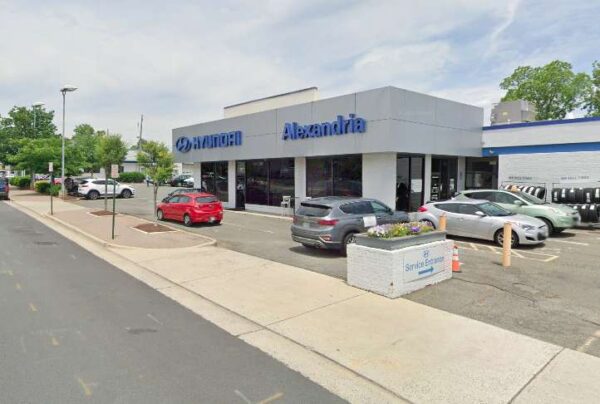 The Alexandria Planning Commission partially approved plans that will allow for a car dealership to keep operating on Mount Vernon Avenue in Del Ray.

Alexandria Hyundai has operated on two acres of land between the 1600 and 1800 blocks of Mount Vernon Avenue for more than 20 years. Owner Kevin Reilly says that his dealership needs to conform to industry changes by converting to electric vehicles in order to stay in business, and filed three special use permit (SUP) requests with the city.

The Planning Commission denied Reilly’s request to allow for the continued use of the parking and storage lots at 1605 and 1611 Mount Vernon Avenue, but approved two other SUP’s — with conditions — for the properties at 1707-1711 and 1801 Mount Vernon Avenue.

Reilly wants a 20 year extension on his special use permits, which currently allow his business to operate until 2025. His proposal includes a new service drive-thru lane, service reception areas and the installation of four electric vehicle chargers for community use — in exchange for allowing the dealership to continue operating until 2045. 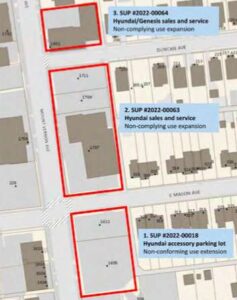 “Hyundai has a global design initiative program, and as a dealer if I do not comply, the financial penalties basically make it not viable for me to continue,” Reilly told the Planning Commission on October 6.

City staff, however, say that the dealership does not fall in line with the city’s master plan, which calls for more active and pedestrian-serving uses for the neighborhood. Staff presented rendering of other potential uses for the site, such as townhouses or a mixed-use building with a car dealership on the ground floor.

The efforts were ridiculed by Cathy Puskar, Reilly’s land use attorney. Puskar said that heigh restrictions in Del Ray prohibit such development, and that the building used by city staff as an example of residential units above an auto dealership is 60 feet tall — 15 more than what is allowed. She also said that a conceptual drawing with town homes lacked details.

Example of a mixed-use building with urban automobile dealerships on the ground floor and residential units on upper floors in a Bethesda, Maryland, pedestrian-oriented commercial core area. (Via City of Alexandria)
Conceptual drawing by City staff for a mixed-use building on the 1605 and 1611 Mount Vernon Avenue lots. (Via City of Alexandria)
Previous Image 1/2 Next Image

The conditions approved by the commission stipulate that:

Gayle Reuter of the Del Ray Business Association said that Reilly should be allowed to stay on Mount Vernon Avenue.

“Why wouldn’t we want to keep such an outstanding business in our neighborhood?” Reuter said. “For those who think that the ownership distracts from new development and improvements to the community, tell that to the brand new townhouses directly behind the dealership that are now on the market for $1.5 million.”

“Auto sales and parking lots really divide the two commercial ends of (Mount Vernon Avenue),” she said, adding that her position was not personal against Reilly. “We all like him and don’t wish him ill.”

All three special use permit requests now go to City Council for review.