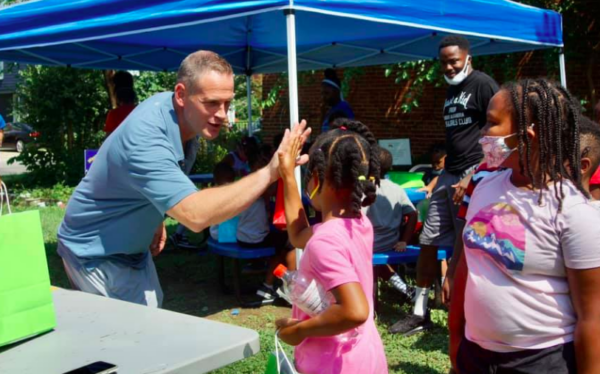 Boyle, a retired Marine Corps captain with combat tours in Iraq, has two young children in ACPS and gives the school system a four out of 10 for its COVID-19 response. He says students should have gone back to full-time in-person learning sooner than the beginning of this school year, and criticized Superintendent Gregory Hutchings for putting his own kids in private school.

“I decided I wanted to run when I thought I saw the neighboring areas opening and the private or Catholic schools reopening as we idled,” Boyle said. “It just didn’t seem to be in the best interest of all of our children and the immense challenges facing them and their families.”

He continued, “I’m excited about the opportunity, but I look at myself as a crisis leader. I always have. We all went through this incredible challenge and there gonna be more challenges ahead but challenges also present opportunity.”

Boyle is critical of School Board members who are leaving, as there are only three of nine incumbents running for reelection.

“That’s not leadership, right?” Boyle said of the exodus of members of the Board. “(Leadership) is rolling up your sleeves, getting your hands dirty.”

Boyle says Rief and Greene made bad decisions when they voted against the memorandum of understanding with the Alexandria Police Department, which passed 6-3. City Council ended up overriding that decision and defunded the SRO program. The officers were reinstated in a 4-3 Council vote last month after Board Chair Meagan Alderton and Hutchings pleaded over rising incidents of violence and weapons in schools.

Boyle says he is not anti-face masks of anti-vaccines, and made a medical mask exemption for his children. He did not say what their disability is, except that it is a private matter with his family’s doctor. He also said that the ACPS community received mixed messages from the office of Superintendent Gregory Hutchings, Jr.

“We were trying to adhere to this ever-changing guideline of six feet versus three feet (of distancing for students) and how would that work,” Boyle said. “I remember having discussions with leaders and just saying… ‘If spacing is the issue because we can’t bring everybody back, let’s put out tents on the field, let’s get creative so that we can actually bring these children back.”

A U.S. Naval Academy graduate, Boyle and his family have lived in Alexandria for 10 years. He’s been a regional vice president at cybersecurity firm Zscaler since last year, and became a software sales manager for Oracle after leaving the Marines. He is also received the Combat Action Ribbon, the Navy Commendation Medal and Navy Achievement Medal.

Boyle says he got into cybersecurity shortly after being ambushed on patrol in Iraq in 2005.

“I realized when I got back home that that was sort of the next battlefield, that there’s going to be a war fought on this digital terrain, and if I were to ever get out (of the Marines) that’s where I’d want to be,” he said.

Boyle says he is a transparent and consistent leader.

“I had no designs of running for School Board, but I see a crisis here, and we have to step up and it requires parents to do their part, whether that’s in the PTA, whether that’s on the school board and get engaged in their community,” he said. “What you’re gonna get from me is representation, and I plan on being highly accessible to the community.”