Alexandria is seeking state funding for a couple of transportation projects, but competition is fierce in a region full of localities hoping to overhaul their transit systems despite the pandemic’s dire financial ramifications.

The Northern Virginia Transportation Commission (NVTC) recently announced the shortlist of proposed transportation projects that could receive funding through the Commuter Choice program. Each project is scored based primarily on technical merit — like how many people benefit and how much travel time is saved — but also on criteria like cost effectiveness and interagency collaboration.

The top project submitted by DASH, the city’s bus network, is for “enhanced bus service from Van Dorn Metro to the Pentagon.” The funding request is for $5.7 million, making it the most expensive project on the list, and netting an application score of 66 out of 100 and sixth place on the list of potential projects.

DASH’s other proposed project is enhanced bus service from Mark Center to Potomac Yard. The funding request is $3.6 million but the project also has a lower application score of 56 points.

Both projects aim to boost service on lines to-and-from the West End, which is one of the goals of an overhaul later this year that seeks to provide greater service at higher-density residential areas like parts of the West End at the cost of reducing geographic coverage through some of the less-dense neighborhoods.

Members of the public are invited to submit feedback on the proposed projects before May 17. 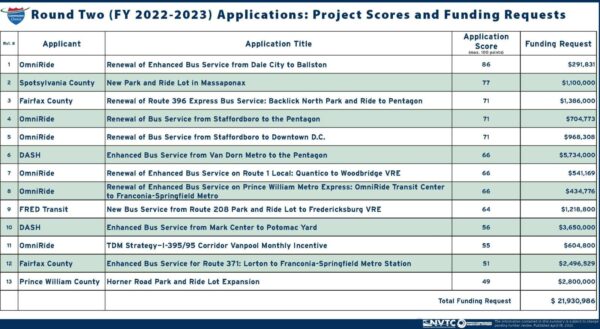