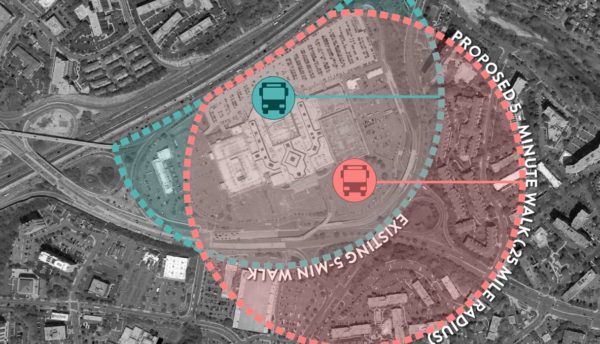 As the city prepares to head into 2021, staff and Transportation Commissioners have been putting together a New Year’s resolution of top transit priorities for the next two fiscal years.

In a report prepared for tomorrow’s Transportation Commission meeting, 20 planned transit projects were ranked by their priority to staff and commission members.

The top scoring item was the Landmark Transit Hub, a planned nexus of bus rapid transit, Dash and Metro bus traffic in the West End.

“[The goal is to] provide an urban transit hub within the neighborhood… to serve as a stop and transfer point for bus rapid transit, DASH, and Metro Bus service,” staff said in a description of the project. “Bus stops will be provided as on-street parallel spaces.”

The new transit hub was listed as costing over $5 million with a ten-year timeframe to start construction. A presentation from staff in 2018 said that Landmark Mall is the most-used non-Metro station transit location in Alexandria and is a critical transfer hub for various bus lines.

Part of the new hub would be a series of bus terminals to allow smooth transfer between bus routes, as well as access to the planned transitway in the area.

The next highest ranked priority was the expansion of bike trails in Alexandria based on earlier-identified needs.

“Bike and multi-use trail projects were prioritized for the 2016 update to the Ped/Bike Chapter of the Master Plan,” staff said. “This project compiles at least 7 of the 10 prioritized projects that call for the construction of 4.8 miles of new trails.”