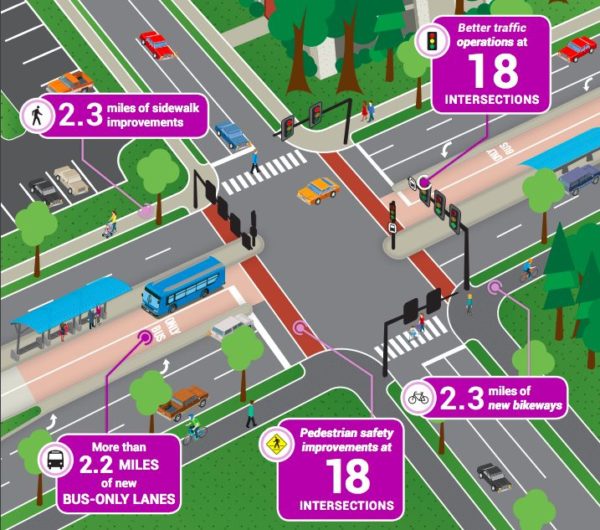 A long-planned bus rapid transit network (BRT) that would run through Alexandria’s West End is moving forward early next year, though the dedicated bus lanes featured prominently in the conceptual stage might not make it into the initial designs.

The city’s vision for the West End Transitway is a series of transit improvements to create a reliable, accessible bus line that would run from the Van Dorn Metro station to the Pentagon, hitting West End destinations that aren’t accessible by Metro, like the Mark Center, Southern Towers, and the perhaps soon-to-be-redeveloped Landmark Mall. 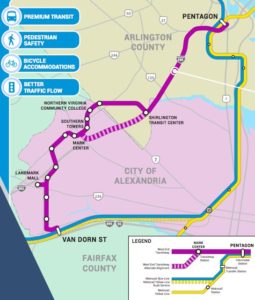 The goal is to make mass transit more accessible and more appealing to the car-heavy West End. After years of studies and securing funding, Steve Sindiong, project manager for the West End Transitway, says the design phase for the project is scheduled to start in early 2020.

Sindiong said the designs will include new traffic signal priority, pedestrian and bicycle-friendly streetscaping, and queue jump lanes — a short stretch of bus lane that allows a bus to easily pass through intersections.

But dedicated bus lanes, like those on the Crystal City-Potomac Yard Transitway and one of the earliest identified goals for the West End Transitway, are unlikely to make the cut in the initial phase of improvements.

“The reason we’re not proceeding with dedicated lanes at this time is a lack of funding,” Sindiong said. “We don’t have funds to do the full improvements. It would require a lot of rights-of-way which we try to get as development occurs, which hasn’t been occurring on Van Dorn as early as was anticipated.”

Some redevelopment has been occurring in the Van Dorn area, however, like the Vulcan Materials site approved for redevelopment in October. The city has also been working to push industrial uses out of the area — as in the case of the Virginia Paving Company being told to clear out — to make room for more residential and commercial uses.

With $70 million collected for the design and construction of the transitway, Sindiong said staff is ready to start moving forward with initial improvements for the West End Transitway and incorporate dedicated bus lanes later.

“The dedicated lanes are important and we are planning to eventually do the full build,” Sindiong said. “We will have to continue seeking funding and acquiring right-of-way through development. Putting in other improvements, like queue jump lanes and new bus stations — will improve the transit speed and reliability [in the meantime].”

The new transit improvements will also coincide with DASH’s plans to shift to a bus network that with a smaller coverage are but improved bus frequency in high-density areas. As a sort of proof-of-concept, Sindiong said the city has been working on improving service on AT1, a bus route that hits roughly the same areas as the eventual West End Transitway.

“We’re improving that service so people can expect ten-minute frequency during peak hours, and twenty for off-peak,” Sindiong said. “We’ve extended the service hours and added real-time bus information. This is the first step towards the West End Transitway… we want to track that to make sure the route is being productive.”

The West End Transitway also features into the Northern Virginia Transportation Commission’s plans to build a new BRT line along Route 7. The Transitway overlaps with a planned bus route that would connect Alexandria to Tysons, Pimmit Hills, Seven Corners and Bailey’s Crossroads, according to WTOP.

“The design would tie in at the Mark Center Transit Center and would use part of the city’s West End Transitway improvements,” said Sindiong. “It would turn onto Beauregard [Street] and stop at the city stops. For a small portion, there would be two overlapping transitways.”

Read more →
More Stories
Sand and Steel Fitness Opens in Alexandria’s West EndAsk McEnearney: Should You Decorate While Your Home is on the Market During the Holiday Season?