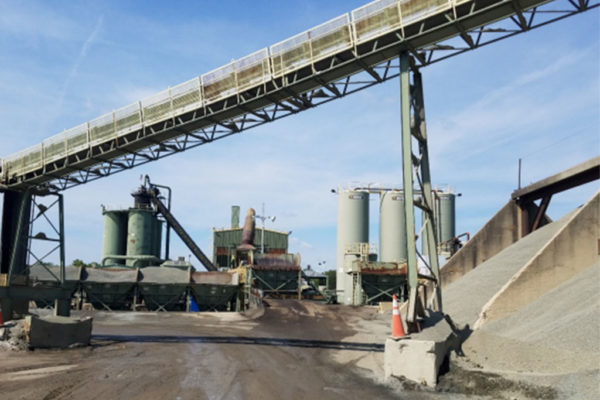 Favoring the Planning Commission’s decision over staff’s recommendation, the Alexandria City Council has told the Virginia Paving Company it has seven years to vacate its West End property.

The requirement comes as the city is working to transform the Van Dorn Corridor — today an industrial and car-heavy stretch from the Van Dorn Metro station to Landmark Mall — into a more residential-focused area.

In one form or another, there has been a paving plant operating at the site since 1960. But the site was specifically identified in the Eisenhower West Small Area Plan as being a location prime for redevelopment as a commercial and residential hub. The Vulcan materials site across the street is already primed for redevelopment as a mixed-use residential, commercial, and hotel property.

City staff had recommended Virginia Paving be required to close within three years, citing the 2015 approval of the Eisenhower West Small Area Plan as when the clock should have started ticking for the company to prepare for closure. But Mary Catherine Gibbs, attorney for Virginia Paving, successfully argued to the Planning Commission and then to City Council that there has not always been clear communications from staff over the years about whether that closure was going to happen or when.

The City Council unanimously picked 2027 for Virginia Paving’s closure, giving the company more time to phase out operations and find a new buyer for the site. But the City Council also required Virginia Paving and city staff to have regularly scheduled meetings to ensure that progress is being made.

“At the end of seven years, I don’t want you coming back and saying ‘whoops, we need more time,'” said Councilwoman Redella “Del” Pepper. “I want to button it down so that in seven years they’re out. It did not come as a surprise to them that they were going to be asked to leave because they knew that we had this in our mind as we passed it the first go-around… I want it chiseled in stone so we don’t have to go through this a second time.”