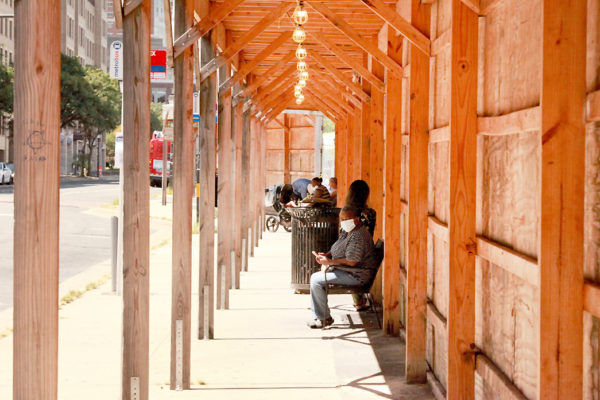 A quarterly report on the status of Alexandria’s capital projects is headed to the City Council tomorrow (Tuesday) with some bad news: the pandemic has created some setbacks and additional challenges for anticipated projects across the city.

At the Potomac Yard Metro station, a contractor out of Pennsylvania was unable to make progress on the work for part of the summer due to COVID-19 restrictions

“Work on the AC Switchgear building slowed while WMATA and the Contractor discussed quality concerns with the concrete placement for the east and south walls,” the report said. “The Constructor submitted a notice of a potential delay based on a subcontractor being required to return to Pennsylvania — COVID 19 restrictions.”

Since then, construction has continued on various parts of the station, like the platform foundations, elevator pits, and the A/C Switchgear building.

“WMATA finalized the Change Order to add the South Pavilion to the Contractor’s contract,” the report said. “This action continued past the initial completion timeframe as a result of extended WMATA review time.”

The Waterfront Plan now faces a year of potential funding delays as a result of the pandemic.

“All FY21 funding has been deferred to FY22 due to COVID-19 economic impact,” staff said in the report. “Additional changes were submitted to spread the funding over FY21-FY23 based on when the funding will be needed. As project design optimization and estimations continue, more accurate project costs can be provided.”

Plans for four miles of a transitway corridor along Van Dorn and Beauregard streets were hit with a delay this summer, but has made progress since. The procurement process for the project was delayed due to COVID and phase 2 of the project, an extension up to Southern Towers, was placed on hold following a change of ownership of Southern Towers. Meetings between staff and the new owners have since been scheduled.

Some final planned improvements for Windmill Hill Park were in jeopardy over the summer, the report said. The city added a living shoreline and other improvements to the Old Town park to combat debris issues, but a planned Phase II — including a northern pier at the site — had its funding pulled away due to the city’s budget crisis. Since then, the project has been added to the procurement plan for the third quarter of this fiscal year and an updated timeline is imminent.

For the long-troubled King Street Metrorail improvements, the project is likely to require additional funding despite earlier estimations that added costs would still fall within the contingency budget.

The Contractor will continue working towards the completion of Phase I – Reopening of the Bus Loop and overall project completion. Staff will continue to monitor and track the construction progress, working closely with the Contractor’s leadership to advance the project to completion. Additional funding needs resulting from the prolonged construction duration (extension of the CMI services contract) and to cover the cost of unforeseen site and design issues (beyond the existing construction contingency) to be addressed by Staff.