Developers are looking for  anew restaurant to fill between 1,708-9,600 rentable square feet of space in the new Shops at Carlyle Tower development along Eisenhower.

A flyer put out by the developer noted that the site could also feature outdoor seating near the busy intersection. 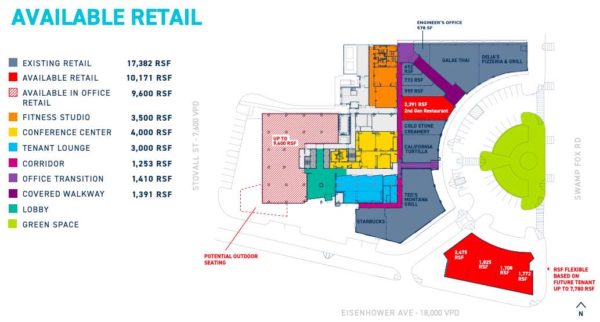 The corner is a prime location, located at the corner of Eisenhower Avenue and Stovall Street off the exit to I-495. The location is also directly across from the Eisenhower Metro Station — a claim that could be less prestigious if Metro plans to move forward with closing the station. The corner is also close to the National Science Foundation and the Patent and Trademark Office a little further down Eisenhower Avenue.

The corner is planned as a new Shops at Carlyle Tower rebranding of what locals know as the Hoffman Town Center. The planned restaurant is neighbored by Starbucks and a recently sold Cold Stone Creamery.