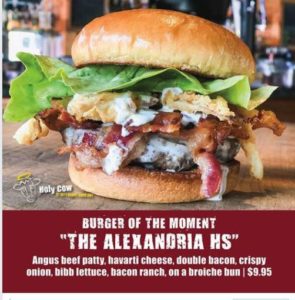 You haven’t made it as a local controversy until Holy Cow Del Ray makes a burger in your honor.

This month, the subject is the name debate around T.C. Williams High School. The local burger joined the fray with “The Alexandria HS.”

“We think that The Alexandria [High School] Titans has a nice ring to it,” the burger shop said on Facebook. “What are your thoughts?”

The burger is an Angus beef patty with Havarti cheese, double bacon, crispy onion, bibb lettuce, and bacon ranch on a broiche bun.

“We’re always trying to name them after current pop culture things, whether that’s national, state or local,” Bill Blackburn, owner of Holy Cow Del Ray, said. “The topic de jure is the T.C. Williams High School name. The writing is on the wall, it’s probably going to be renamed. The only question is when and what. We throw one option out there and make it kind of a debate.”

The school board decided in July that it would take up a discussion on whether to rename the school this fall.

The comments on the Facebook page were mixed between those who agreed with the name and other suggesting names after local Civil Rights figures like Earl Lloyd.

Blackburn said there’s always a risk for more controversy with anyone that’s named, so Alexandria High School is a safe and unifying option.

“I think right now, Alexandria, more than any time since I lived here, we need to be one Alexandria,” Blackburn said. “Naming it after someone is divisive. Alexandria needs to come together as one. We identify strongly with only having one high school.”

As for the contents of the burger, Blackburn said the goal was to make a good burger rather than finding something to fit the name — unlike the addition of Miracle Whip to the Seminary Road-Dockless Scooter-Waterfront Development-Halal Butcher-Bike Lane Sandwich.