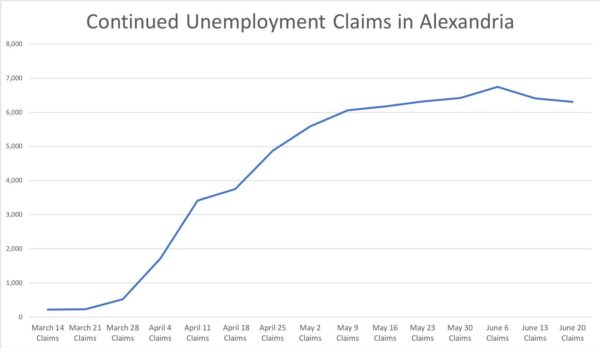 Updated 5 p.m. — Original percentage of the estimated population was in error

In late March, around 225 Alexandrians filed continued unemplyment with the state. Three months later, as June winds to a close, 6,306 Alexandrians — or 4% of the city’s estimated population — are still unemployed, according to the Virginia Employment Commission.

Initial claims — the first time someone files for unemployment — have gradually gone down over the last several weeks since a high in early April. The weekly number of continued claims, however, hit its peak of 6,751 on June 6. It’s fallen steadily in the two subsequent weeks, but remains over 6,000.

Data shows that continued unemployment claims hovered around 200 before the pandemic kicked off. The city has been behind much of the rest of Virginia for earlier phases of reopening. Alexandria and the rest of Northern Virginia will catch up with the rest of the state during Phase 3 of reopening on Wednesday.

New cases are being reported as the city starts to reopen. There have been 57 COVID-19 deaths in Alexandria.