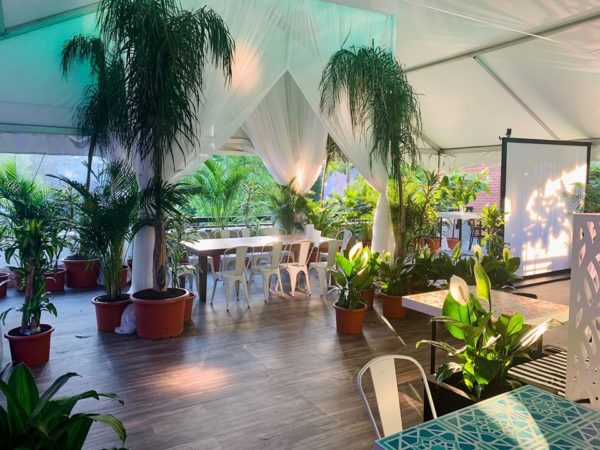 (Updated 4:50 p.m.) There isn’t a lot of space inside Lena’s Wood-Fired Pizza & Tap (401 E Braddock Road) to both reopen the restaurant to the half-capacity required in the second phase of reopening and maintain the take-out service, so restaurant operator Dave Nicholas said the restaurant decided to transform

“We decided that our to-go business is really strong,” Nicholas said. “Want to still be able to service neighborhood to-go. We decided to do a pop-up tent and concept on top of the parking deck behind the restaurant.”

The new venue is Lena’s Oasis, a covered pavilion with plenty of room for social distancing amid the curtains and tropical plants that transform the environment to more closely resemble Tahiti than the pizzeria near the Braddock Metro Station. It requires a reservation to enter.

“It’s sort of a tropical theme, selling some of our specialty menu items and five new cocktail/tropical drinks,” Nicholas said.

“We figured that we didn’t have the space inside the restaurant to properly social distance,” Nicholas said. “Meanwhile, this is 4,000 feet on top of the parking deck and we’re able to socially distance properly. It’s outside and covered, very tropical.”

“It’s been going well so far,” Nicholas said. “People walk into the space and it’s stunning.”