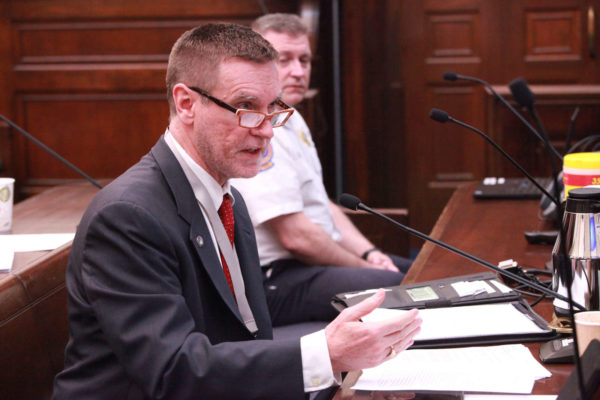 Updated 4:15 p.m. — As weeks drag into months and the coronavirus pandemic seems no closer to closure, Alexandria officials are trying to pin down what it will take for life in the city to go back to normal.

“To reopen, there needs to be widespread testing [where] anybody has the capacity to get it,” Haering told the city council last night. “We need to see, across the region and the entire area, 14 days of continuous decrease in new cases. Then, on top of that, we need to be sure that the hospitals, public health, and EMS are all intact and can handle their work.”

Today, Gov. Ralph Northam announced he would be extending the closure of non-essential businesses to May 8.

Haering said that as of April 16, 1,194 tests have been conducted in Alexandria, with 248 positives — meaning roughly one-fifth of those tested have turned up positive. There have also been four deaths in Alexandria due to the virus.

“You should assume everyone is infected and it’s in every neighborhood,” Wilson said.

Haering said it won’t be enough just to have widespread testing, but that testing results will also have to be reliably returned in a timely fashion.

“Widespread testing means we need to get results back in hours or the next day,” Haering said. “Because at the start we were getting test results back seven or eight days later.”

While Alexandria Hospital is currently at around half-capacity, and planning is underway for alternative care facilities, Haering said the hospital has the capacity to handle a surge.

Meanwhile, Haering described the tightrope walk between pressuring the state and healthcare providers for more information about COVID-19 victims and his agency’s own restraint in releasing information about the outbreak.

Haering said his office is committed to collecting information on race and ethnicity when they investigate confirmed cases of COVID-19, and is asking healthcare providers to give that information.

“Virginia Department of Health is providing that already, but what we’re looking to do is provide that to us by jurisdiction,” Haering said. “I asked them last week, and again today, to provide that by jurisdiction. We’re asking that on behalf of all regional health directors. We want that total numbers performed and tested positive.”

Despite pressuring the state Department of Health to release more information about who is being impacted by the outbreak Haering is still keeping the cards close to the chest for information released locally. Haering said the health department reviews cases internally for patterns of areas that seem to be more impacted than others, but said his team has not found those patterns and addresses potential outbreak sites internally.

“When we call close contacts that have been identified, we never identify who the case is,” Haering said. “When we call people, we say they may have been exposed to COVID-19 and ask how they’re doing.”

Haering said the primary reason the Health Department would go public about a potential outbreak site would be concerns that they can’t contact everyone who may have been there, as was the case at Murphy’s Grand Irish Pub and Immanuel Chapel.

“If there was a public need to know we would use the media to announce that there were certain potential exposures and this is what people need to do if they were in that area at that time,” Haering said.

Councilman John Chapman said he was approached at the onset of the pandemic by residents concerned that they might now know there was an outbreak in their neighborhood until it was too late, but Haering it was better to residents to assume that there was.

“We want to remind everyone: we have widespread community transmission,” Haering said. “If people identify everyone they know and there’s no one that’s confirmed, we know it’s out there, and they could have no symptoms or mild symptoms.”