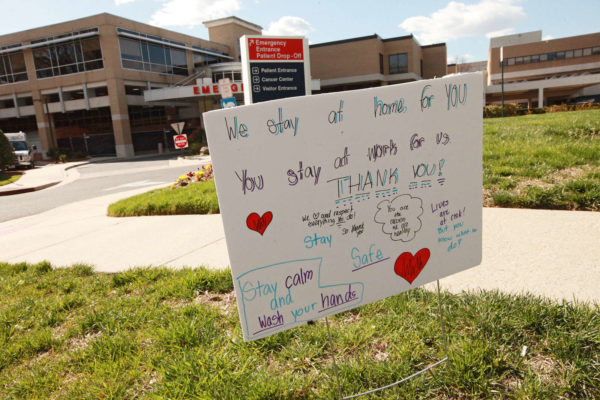 In a candid discussion on Facebook last night (Thursday), Alexandria Mayor Justin Wilson outlined some of the largest impacts COVID-19 could have on Alexandria citizens and the city government.

How the outbreak could impact plans for schools, economics, and the health of the community were the top issues in Wilson’s “living room town hall”.

With $56 million less in preliminary estimates for the budget than was originally planned, Wilson said nothing was off the cutting table.

“Nothing is sacred,” Wilson said. “Nothing is off the table. Nothing is untouchable. We will see impacts to the capital budget and operating budget. One of the bigger projects is the rebuild at MacArthur [Elementary School]. My guess is, given where we are in the project, that would be a project we want to continue to proceed. However, we’re going to have to look at everything. If there’s a school project affected in the near term, probably going to be the rebuild of Minnie Howard.”

“We are going to lose a lot of businesses in our city through this situation,” Wilson said. “The federal CARES Act is helpful, but won’t be enough. For several, revenue has gone down to zero, which makes payroll and paying rent impossible.”

Acknowledging the risk of coming across as callous, Wilson said the city needed to start preparing for how to help the city’s commercial tax base recover.

“We are looking at how we see around the corner,” Wilson said. “We need to prepare for the recovery and how we bring back commerce in our city. We’re going to have a lot of work ahead.”

For now, though, the number of confirmed cases in Alexandria continues to rise, currently sitting at 67 cases.

“The challenge with testing numbers: this is a picture of time,” Wilson said. “Because of the delay in testing and the incubation period, this is reflecting folks who were infected quite a while ago. We’re going to continue to see that before we see things get better. If you believe the models, we’re still several weeks off from the peak.”

Wilson said every expert he’s talked to has said Alexandrians should expect that number to continue going up. The state is putting together new models for the spread of the disease with the University of Virginia, Wilson said, which should be released early next week.

“This is reflecting infections that happened two weeks ago in some cases, because of the incubation and several days of lag in test results,” Wilson said. “We won’t see the impact of social distancing for a while now.”

In the meantime, the health department is interviewing each positive case and doing contact tracing to determine who else those people came in contact with and making sure that they track down and notify those folks, Wilson said.

Those with medical experience can help by volunteering with the Alexandria Medical Reserve Corps. Other organizations throughout Alexandria could also use help, and volunteers able to sign up either at Volunteer Alexandria or on the city website.

On a smaller scale, Wilson said many local residents have been using the stay at home order as a chance to get more gardening done. Wilson warned that yard waste collection has been suspended, meaning if residents want to dispose of those weeds they’ve pulled up they’ll have to do so by composting.

“When we have the ability to restart that we certainly will but right now we’re encouraging people to set up backyard composting to deal with that,” Wilson said.

Wilson also noted that because more people are staying at home, the city is seeing much larger amounts of trash being set out on curbs.