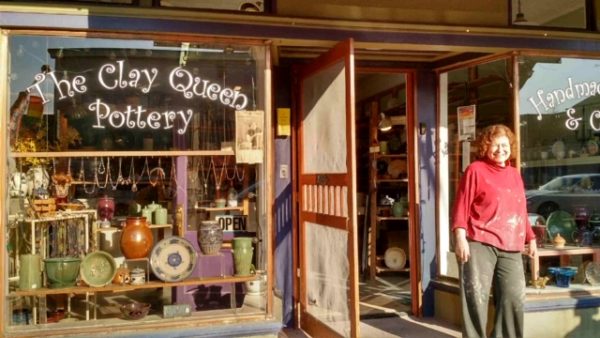 “Support your local potter and buy your Christmas presents now,” Altman told ALXnow. “Everybody’s worried about the restaurants and there’s other small businesses that also need support, like that yarn shop fibre space, and kiskadee and Silver Parrot and all kinds of places.”

Altman’s shop, The Clay Queen Pottery, has been open at 2303 Mount Vernon Avenue for nearly 20 years, and the COVID-19 pandemic has forced her to cancel her four weekly classes, which bring in the bulk of her revenue.

She also gave her students clay to take home to make pinch pots.

“When I had to close the studio because of the virus, people were saying, ‘I’m gonna lose all my skills!’ and I smile and tell them, ‘You’ve got muscle memory, don’t worry about it,'” she said. “It’s going to be very interesting with COVID-19, and I will not have to teach classes and can sit here all by myself and make pots and see what the creative juices create.”

Altman started taking pottery classes at Eastern Market Pottery in the District in 1972, and, three years later, quit her job at the Smithsonian National Museum of History and Technology and became a full-time potter. For 25 years, she primarily sold most of her work at Eastern Market until opening The Clay Queen Pottery in 2001. The shop makes high-fire stoneware ranging from $25 to $175, which is fired at hotter temperatures to create a glass-like texture.

“Things will be all right, God willing and the creek don’t rise,” Altman said. “I just wrote the check out for the May rent, and over the last two weeks I sold almost enough pottery on Facebook, and I’ve pretty much covered it.”

First a gigantic thank you to everybody for sharing my posts and photos with so many people. I am deeply touched by the…

END_OF_DOCUMENT_TOKEN_TO_BE_REPLACED

More Stories
Del Ray Bicycle Co-Op Closes but Business is Booming for Bike Shop in Old TownMayor: ‘Nothing is Off the Table’ for Upcoming Budget Cuts and COVID-19 Response