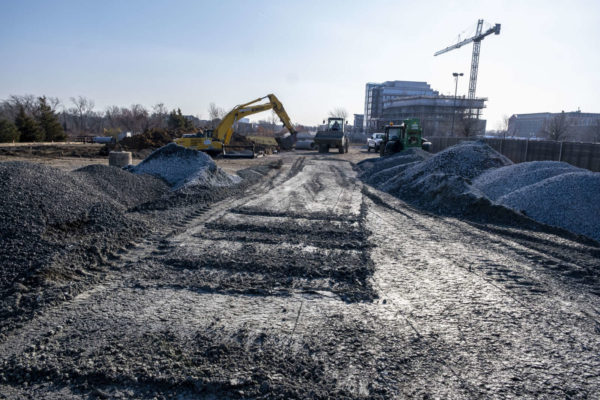 After months of stalled discussions over the cost of adding southern access to the Potomac Yard Metro station, Mayor Justin Wilson said the city could start the process of financing it over again.

The Potomac Yard Metrorail Implementation Work Group “expressed a great amount of frustration at the amount of time we have spent working with WMATA and their contractor to come to an agreement on a potential change order for improved southwest access,” Wilson said at the City Council meeting last night (Tuesday). “The message that was crystal clear from PYMIG was to set a date to have pencils down regardless of where we’re at and pursue going back to market to bid out the improved southwest access.”

Wilson said the group’s attitude was one of “frustrated impatience” with the way the WMATA has handled this.

The original southern entrance to the Metro station was cut from early plans to save money. As something of a consolation prize, a path to a pedestrian bridge, from neighborhoods to the south to the entrance on the north side of the station, was added.

The city has been in discussion with WMATA for months after prices the latter negotiated for the southern access ramp came back higher than the $50 million allocated in a state grant. During PYMIG meetings, city officials repeatedly said they believed the price was substantially higher than what it should be.

Wilson acknowledged at an earlier meeting that while going back to market for bids on the contract could get a better deal, it could also show that WMATA was correct and the numbers will be even higher than the current bids.

At the site itself, construction is progressing. Staff said at the City Council meeting that the walls are being poured in for the AC switchgear building. Contractors are currently working on ground stabilization to support the station and driving piles on the west side for the north pavilion.

END_OF_DOCUMENT_TOKEN_TO_BE_REPLACED

More Stories
Del Ray Restaurant Bon Vivant Suddenly ClosesAsk McEnearney: How Can the Lender I Use Give Me a Competitive Edge?