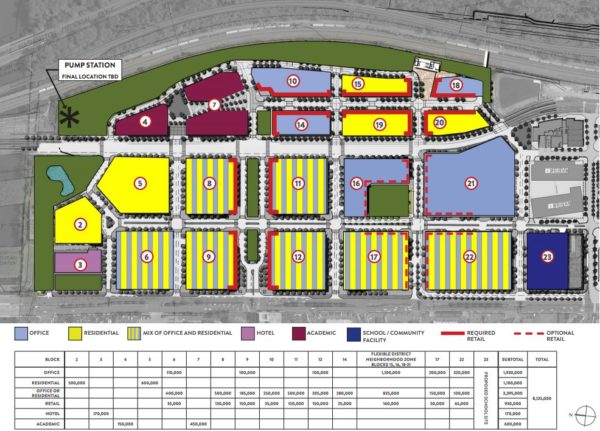 Just a few days after submitting plans for the Virginia Tech site near the North Potomac Yard Metro station, JBG Smith has submitted early concept designs for the development that will replace Target and the other Potomac Yard stores.

While the area is known today as a big-box shopping center and surface parking lot, the majority of the new development will be office and residential spaces in a large grid, the Washington Business Journal first reported. Ten of the buildings will be required to have retail, with optional retail at the southern end of the site.

Other features of the plan include a hotel at the north end of the site and school or community facility at the southern end. The site was one of the locations considered for a second high school, but while the School Board ultimately voted to stick with an expanded T.C. Williams High School, administrators still expressed interest in putting some kind of educational facility at Potomac Yard.

Several of the properties closest to the North Potomac Yard Metro station are classified in plans as a flexible neighborhood zone. Current plans show the majority of that space — including the Target, as offices.

A public meeting to discuss the North Potomac Yard development is scheduled for next Thursday, Nov. 14, from 7-9 p.m. in the National Industries for the Blind (3000 Potomac Avenue).

In all, the two redevelopment plans total more than 8 million square feet of space.