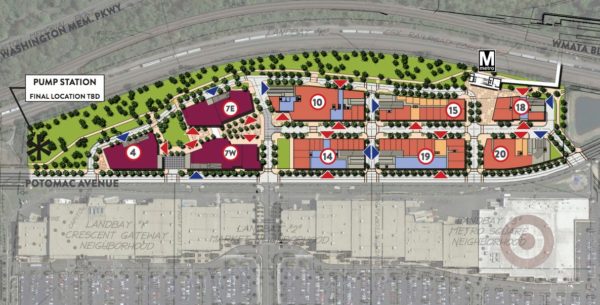 (Updated at 10:50 a.m.) Plans are starting to take shape for North Potomac Yard.

Virginia Tech has submitted its first concept plan, showing what its Innovation Campus will look like just as the design of the Potomac Yard Metro station nears its final design phase.

Virginia’s Tech’s campus — which will offer master’s and doctoral level programs — is part of a vision for a completely revitalized North Potomac Yard around the new Metro station. The plans were accompanied by related proposals by real estate investment companies JBG Smith and Lionstone.

Plans submitted on Friday, Nov. 1, show an open grid of nine buildings, with 600,000 square feet of academic use split over three buildings centered at the north end of the site. (The university had a special use permit for a temporary space in the existing Potomac Yard shopping center approved in September.)

Missing from the plans: the Regal movie theater on the North Potomac Yard plan, which is expected to be demolished. It’s unclear when the theater will close, nor whether it would reopen elsewhere. 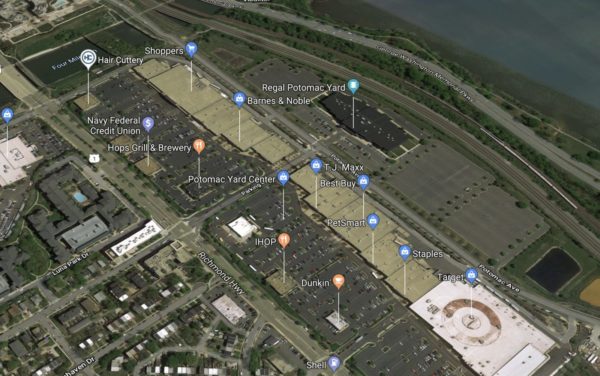 Height assumptions for the area show most buildings will be an average of 90 feet tall, with the academic Block 7W towering over the others at 180 feet.

Some astute Twitter users noted that the plans also show an extension of the Potomac Yard Trail to Four Mile Run, though others questioned whether the trail will connect to the one along Four Mile Run without crossing four lanes of traffic.

Big news! Includes the extension of the Potomac Yard Trail (on the top/east side of this drawing) to Four Mile Run https://t.co/zEtYS8FTRc

Meanwhile, infrastructure work is currently underway on the switchgear building for the station, while work on installing utilities and laying the foundation for the Metro station will begin sometime over the next few months, according to an Oct. 29 update from city staff.

The station’s design is scheduled to be finished by the end of the year.

Image (1) via City of Alexandria. Image (2) via Google Maps.