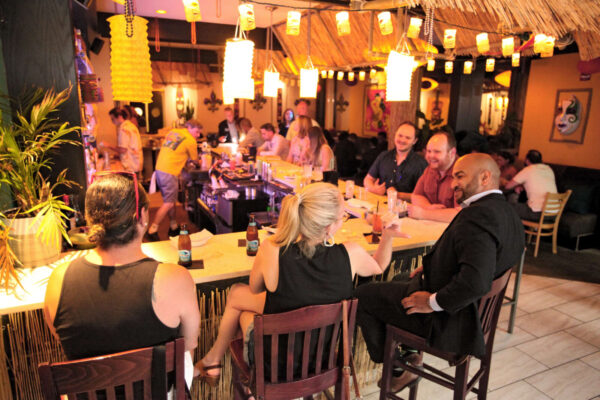 Six months have passed since Tiki Bar Del Ray opened, and co-owner Bill Blackburn says that his pop-up concept at 2312 Mount Vernon Avenue is running longer than expected. After all, he says, who doesn’t like a trip to the beach?

“Our pandemic-strength cocktails, paired with some good bartenders really fit the bill,” Blackburn told ALXnow. “It’s still not the permanent fixture in that space. I’m not calling it permanent. It’s just a pop-up that is running longer than expected.”

Late last year, Blackburn and his  Homegrown Restaurant Group partner “Mango” Mike Anderson had a case of pop-up fever, and converted the space — formerly The Sushi Bar — into the Christmas-themed pop-up bar Joy On The Avenue. The pop-up is situated between their other restaurants – Pork Barrel BBQ and Holy Cow Del Ray, and the plan was to quickly turn around a new pop-up concept every few months — with Tiki Bar Del Ray installed in January. 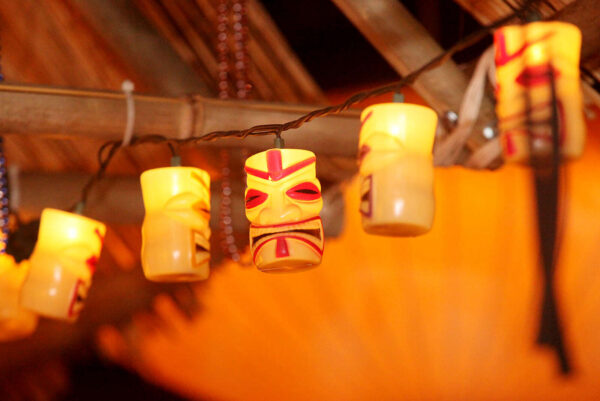 Up went the Easter Island heads, thatched roof and bamboo, and it wasn’t long before Blackburn and Anderson abandoned plans to turn the place into a Mardi Gras-themed bar and other concepts.

This is all familiar territory since Anderson owned Mango Mike’s for 18 years on the West End, and Blackburn tended bar there for eight years. Still, Blackburn says, that doesn’t mean visitors should confuse it as the second coming of Mango Mike’s.

“Mango Mike’s was strictly a Caribbean bar,” Blackburn said. “The Tiki Bar is a fictional Polynesian blend of the Caribbean and the Pacific Islands with mystical and exotic drinks.”