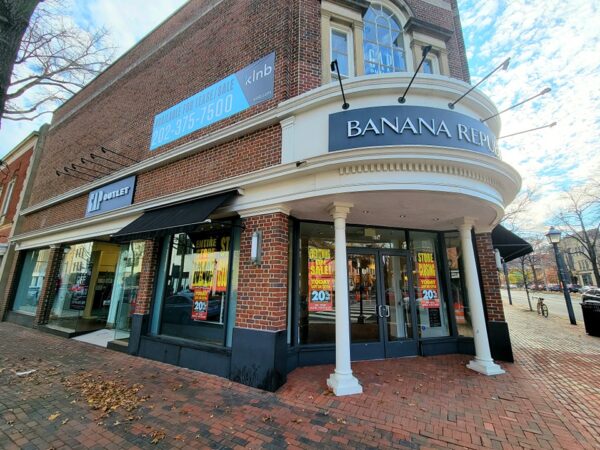 The demolition and redevelopment of 628 King Street, formerly Banana Republic, is headed to review at the Board of Architectural Review (BAR) as the developer hopes to make some changes to the upper part of the building.

Currently, the building’s second floor is an almost entirely windowless brick facade. Jemal’s Gap Corner King, LLC, part of Douglas Development, is applying to demolish part of the north and west parts of the building to add windows to the second floor.

“Staff supports the proposed demolition, as the proposed changes will improve the appearance of the building, which currently appears imbalanced and bulky due to the lack of second-floor fenestration,” the report said. “The character-defining features of the building will be retained, and the overall proportions will be improved. The wall surfaces to be demolished are not of old and unusual or uncommon design, and they could be reproduced easily. Staff therefore recommends approval of the Permit to Demolish.”

The staff report says there was a 19th-century building on the site that was in poor condition and the 1949 BAR “reluctantly” approved demolition and redevelopment. the retail building at the site was combined with adjacent buildings for a store design referred to by the BAR at the time as “simple and dignified.”

Banana Republic and Gap Outlet closed at the location in January after decades in business.