The City of Alexandria is still mulling over what to do with the Torpedo Factory, but one way of paying for the expensive additions could lie in a program started under FDR.

At a meeting of the Waterfront Commission, representatives from the Alexandria Economic Development Partnership (AEDP) outlined one potential path to financing the Torpedo Factory overhaul as part of a “public real estate entity.”

Christina Mindrup, VP for commercial real estate at AEDP, said the partnership has been considering the creation of a new public real estate entity that could help “unlock new financial resources” to assist with arts development in Old Town North, some of which has been stalled and fallen behind the pace of attached developments.

Mindrup said that AEDP is working with the city to assess whether this public real estate entity could absorb the Torpedo Factory.

The topic of TFAC changing governance has been a touchy one, but Mindrup said the change could open up a new source of funding in the Industrial Development Authority (IDA) of Alexandria. The low range of cost estimates, essentially the “do-nothing” build with only the most basic of needed repairs and improvements, is still estimated at $16 million. Cost estimates for more substantial improvements range up to $41.5 million. 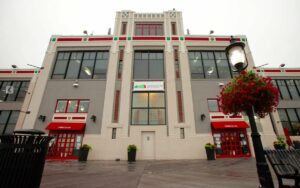 “For those who don’t know, the Industrial Development Authority has been around forever,” Mindrup said. “It’s been around back to Franklin Delano Roosevelt. It was used to help jurisdictions rebuild and put investment in the area.”

Specifically, Mindrup said the IDA can issue tax-exempt bonds to borrow at lower interest rates to fund improvements. It’s a program already in use at other developments, such as the hospital development at not-Landmark Mall.

“This would become a financing tool to help us fund improvements towards the Torpedo Factory,” Mindrup said. “It’s really just a low-interest loan that’s a tool for non-profits.”

AEDP leadership emphasized that the program is just one of several tools being considered, but AEDP President and CEO Stephanie Landrum said one benefit is it could be a revenue source outside of the already strained city budget.

“[We were] asked , as the city is looking at particular governance models, some of which might create a nonprofit or ownership of building not by the city, what models are available to finance improvements,” Landrum said. “There is a cost for improvements that needs to be made that is large and we do not have the money to pay for it. The only way we’ve been looking for that money is traditional CIP or city budget.”

Landrum said AEDP is examining changes to funding that could be made under a different governance model.

“We’re looking at: if the government model changed, could IDA funding be made available?” Landrum said.