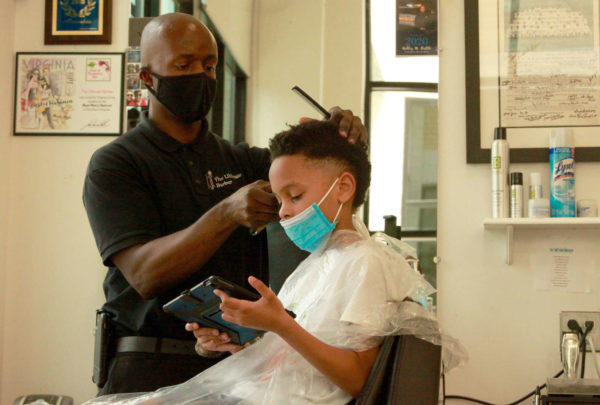 The Alexandria Economic Development Partnership (AEDP) announced a full list of recipients for the program’s ALX B2B program — grant funding aimed at helping local businesses hold out through a sluggish recovery — and is moving forward on another phase of the program.

With the first batch of the funding being distributed to Alexandria businesses, AEDP said the process is starting for figuring out how to divvy up the next batch of state funding between the city’s needs.

“The city received a communication yesterday from the Governor that they will be allocating second half of local funding for CARES dollars,” said Stephanie Landrum, President and CEO of AEDP. “[The City] is going to receive the exact same amount as the first time. That was an important piece we were waiting on. We needed to make sure there was funding. Now that that news has come, we’re working with the City Manager to determine how that money will be allocated.”

The first allocation was divided between funding for grants alongside funding for rental assistance and other needs. Landrum said City Manager Mark Jinks will need to work with the City Council to see if, and how, the percentages of funding allocation need to change this time around.

Meanwhile, Landrum said AEDP has learned a lot from the first round of grant requests.

“We learned a lot about how businesses are structured in the city,” Landrum said. “The proposal for round two would expand eligibility.”

Requirements would change to provide a way for businesses who opened within the last year to prove their financial stability. Landrum also said various types of daycares and contractor-based programs that were excluded the first time around will be included, like barber shops whose employees did not qualify for the first round of the program.

“We recognize that in order for all of us to get back to business, daycare has to be a foundation that’s up and running,” Landrum said. “We had around five to ten daycares that received grants in round 1, but we wanted to reach out to non-profits and providers who are home-based so we can get as many daycares as we can.”

AEDP approved 303 small business grants of the roughly 335 that applied. Those who were deemed ineligible the first time around because of circumstances that will change the second time can work with AEDP to “resurrect” their initial application. END_OF_DOCUMENT_TOKEN_TO_BE_REPLACED 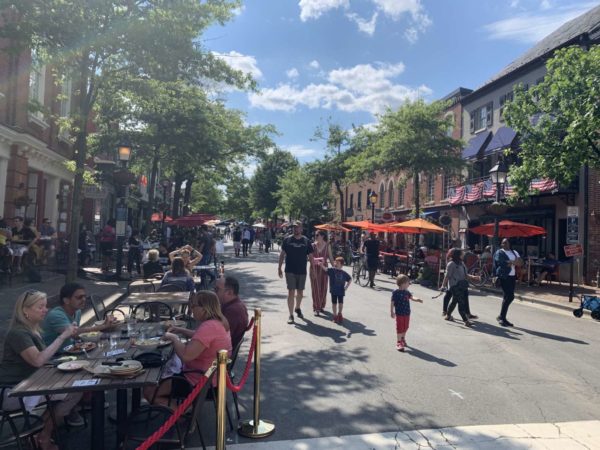 More than 300 businesses across Alexandria are about to receive grants to help them through the city’s sluggish recovery from COVID-19.

Alexandria Economic Development Partnership (AEDP) announced that 309 small businesses in Alexandria would receive funding from the city’s Alelxandria Back to Business (ALX B2B) grants program. The program is supported in large part by CARES Act funding allocated by the City of Alexandria.

“76 percent of successful applicants qualify to receive $10,000, another 17 percent will collect $15,000, with the remaining 7 percent receiving $20,000,” AEDP said in a press release. “The grant amount is directly related to the size of the business.”

“In total, AEDP received 356 complete applications. 309 businesses qualified for funding through the program,” the partnership said. “Of the 48 applicants that did not qualify, most were ineligible due to the total number of employees being outside of the 2-100 employee requirement; delinquent city business taxes; their year-over-year revenue not meeting the stipulation of having decreased by at least 25 percent; or being located outside the corporate limits of the City of Alexandria.”

Recipients of the grants are being notified, after which AEDP said it will publish a list of grantees to the website.

The press release also included a breakdown of demographics on what types of businesses the grants went to. Nearly half of the grant recipients were white.

AEDP noted that 49% of the recipients identified as male, while 40% identified as female, 10% did not disclose and 1% identified as transgender or non-gender conforming. AEDP said grant recipients spanned seven zip codes, including a sizable portion in the city’s West End.

“The COVID-19 pandemic poses significant challenges to businesses across the Washington, D.C. region, and Alexandria Economic Development Partnership, with the support of the City of Alexandria, is pleased to provide critical financial support to Alexandria’s small businesses during this difficult period,” Stephanie Landrum, President and CEO of the Alexandria Economic Development Partnership, said in the press release. “Alexandria’s business community continues to demonstrate resilience in the face of adversity, and AEDP is proud to support our community during the road to recovery.”

For businesses that receive grant funding, there are still restriction on how that can be used, including. According to AEDP, funding can be used for: 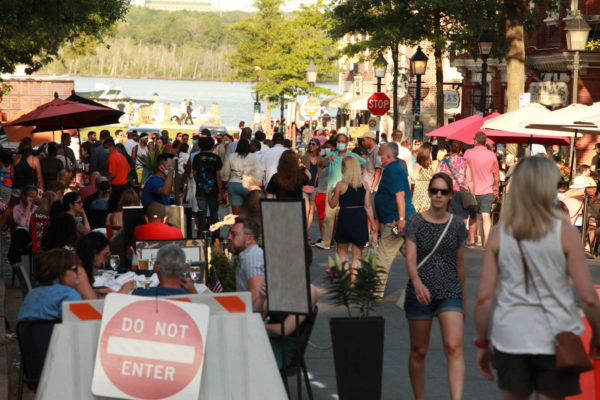 Alexandria, like the rest of Northern Virginia, is scheduled to move into Phase 2 of reopening this Friday. For cooped up Alexandrians, that means local gyms and some entertainment venues could start to reopen.

According to the Alexandria Economic Development Partnership, this will mean a loosening of restrictions on local businesses, including:

Restaurants are also still allowed to file for temporary outdoor dining permits, which were allowed during Phase 1 of reopening.

AEDP also announced that there will be industry-specific webinars to help guide local businesses on reopening policies.

The City of Alexandria previously announced that many of the trash services that were suspended at the start of the pandemic will resume next Monday.

Still, on Facebook, Mayor Justin Wilson cautioned that Alexandrians should be cautious and continue wearing masks as Virginia starts reopening.

Beyer to Introduce Legislation for Law Enforcement to Wear Identifying Badges — “We don’t do secret police in the United States of America. I will introduce House legislation in the next few days to require uniformed federal officers to identify themselves by wearing badges. Next step will be working for broad support in the House. More soon.” [Twitter]

Tenants and Workers United Gives Food and Supplies to 400 Families — “Today we gave food, needs, and diapers to almost 400 families!! This was possible by Arlington Calvary United Methodist Church. Our community greatly appreciates this support during these difficult times!” [Facebook]

Del. Herring Thanks Inova Alexandria Hospital Workers — “Thank you @InovaHealth Alexandria for this display of unity & caring for our community. #WhiteCoatsforBlackLives” [Twitter]

Vice Mayor Sends Message of Solidarity With Black Leaders — “I have a responsibility to use my platform to speak up about these issues. The best way to do that is to amplify the voices of black leaders in our community. If you haven’t already done so, please listen to and read their words. And then take action.” [Elizabeth Bennett-Parker]

ACPS Announces Collection and Return of School Materials — “The school closures related to COVID-19 and the Governor’s stay-at-home order have forced us to make a new plan of how we collect students’ school materials and also allow our students to get personal belongings from their lockers or classrooms.” [ACPS]

Alexandrian Named National Eagle Scout Runner-Up — “Noah Ventura, an Alexandria resident and rising senior at Gonzaga College High School, has been named the American Legion’s Eagle Scout of the Year Runner-Up for 2020. As a recipient of the award, he is receiving a $2,500 college scholarship.” [Zebra]

Local Filmmakers Selected for Alexandria Symphony Series — “The films will accompany music by American composers performed “live to picture” by the orchestra as part of ASO’s 2020-2021 season on November 7 and 8, 2020. The works will also be screened as part of the Alexandria Film Festival on November 12-15.” [Zebra]

Reminder: Here’s a List of ACPS Free Food Distributions — “ACPS has multiple distribution meal site locations throughout Alexandria for all ACPS students and children over the age of two.” [ACPS]

New Job: Contact Tracer — “The Contact Tracer is an entry level public health professional responsible for identifying and contacting individuals who may have come in contact with persons recently diagnosed with an infectious disease associated with an outbreak or pandemic.” [Indeed]

ALX B2B is a new grant program supported, in part, by the City Council as part of the CARES Act funding allocation that also included rental assistance for low-income households.

“The program is opening applications on Thursday and is focused on assisting business going through reopening following the pandemic,” Landrum said.

Landrum said many of the businesses reopening will face new costs, like equipment and furniture to socially distance customers and sanitize afterward. As the city progresses through the phases of recovery, Landrum said these will be the new normal in how companies interact with customers.

“All of that comes at an expense after a period of time when companies have seen huge, dramatic declines in revenue,” Landrum said.

The first round of the program will have $4 million in funding, half from the city allocation of the CARES Act, and half from reallocated funding from the Alexandria Investment Fund. Landrum said at least at the start, this likely won’t be enough to support all of the businesses that need it.

“We do anticipate there will be more demand than funding available,” Landrum said.

A few terms of eligibility will eliminate some businesses. Most broadly, business owners have to express their intent to remain in business, but they will also have to provide information about their lease to show that it’s applicable through the end of the year to demonstrate a commitment to staying in business.

Any business that has opened since March 1 of 2019 is also out of luck for the grant program, as the eligibility requires businesses to show profits year-after-year until coronavirus. Landrum said this is to be able to show the business was stable and could be profitable again.

“We want to invest in businesses with the best chance of surviving,” Landrum said. “Comparing year over year, month to month, is best and most accurate way to show that.”

Corporate-owned businesses are ineligible as well, an attempt to avoid the payouts to megacorporations that plagued earlier small business grant programs. Landrum said a locally owned franchise of a larger chain could still be eligible, though.

“For a business to apply, has to be a locally owned franchise and they would have to present that paperwork,” Landrum said. “There are a number of athletic companies that are national brands but locally-owned franchises. Want to help those people but not direct resources to a corporate entity.”

The grant program is divided into three categories based on employment size, which determines the maximum grant for each business.

“A lot of the qualifications and the eligibility criteria focus on companies with a physical footprint in Alexandria,” Landrum said. ‘It’s recognizing businesses with a physical space are more likely to incur these costs. Examples include restaurants, where many had to buy new furniture for outdoor dining.”

Landrum said other professions, like physical therapists, personal groomers, massage parlors, will all need similar health measures. Even office spaces, which have turned towards more open concepts and squeezing people into smaller footprints, will have to undergo a radical adjustment to keep employees safe.

Background for the program is provided in English, Spanish, Arabic and Amharic, but Landrum said AEDP has phone translation services for business owners speaking any language.

Even for businesses who aren’t able to get a grant through ALX B2B, Landrum said there are other ways AEDP can help.

“One of the number one things we’ve been helping with is talking through real estate portfolios, [helping business owners] understand terms of leases and having conversations with landlords,” Landrum said. “I think that’s something people don’t realize we can and want to do.”

“AEDP and our partners are intended to be a trusted advisor to the business community,” Landrum said. “If any business owner has a question about anything, we might not have the answer, but we’re a connector for what those businesses need. One of the things we can do is listen and be a sympathetic and empathetic ear. When people are anxious, upset, devastated — and on top of that own a business — we can help.”