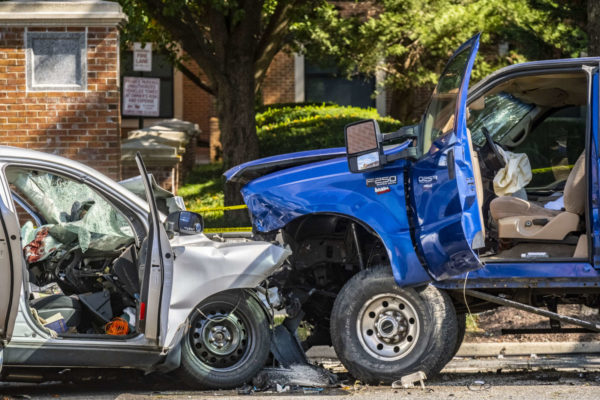 Nestled away in a budget presentation for the Transportation Commission, a report on ten years of crash data shows that crashes in Alexandria are overall on the decline.

The report includes data collected from 2011 to 2020, with a note that the COVID-19 pandemic likely impacted crash data from the final year of the study. But even pre-2020, the total number of car crashes in Alexandria had been fairly consistently declining year after year.

Crashes that involve kills or serious injuries (KSI) were more erratic over the years, remaining at a fairly consistent 3% of all crashes throughout the reporting period.. 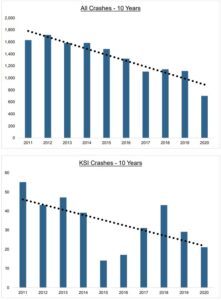 “Crash totals from 2011-2020 show a downward trend for all crashes, including those that involved fatal or severe injury,” the report said. “The 2016-2020 annual crash averages by all modes (vehicle-only, pedestrian, bicyclist) and crash type (all and KSI) are less than those seen during 2011-2015. Year over year, vehicle-only crashes had the highest number of KSI crashes followed by pedestrian and then bicyclist crashes.”

The report only covered crashes on city streets — not including crashes from major highways like I-395 or I-495. Vehicle-only crashes account for most of the KSI crashes each year, followed by those involving pedestrians then cyclists.

The study tracked other information on crashes, like location, time, weather, road conditions and more. The information put together a portrait of which crashes tend to be most fatal.

“During the weekday, high crash frequencies are seen during the evening commute,” the report said. “Early spring had the highest proportion of KSI crashes for bicyclists, while the late summer months were the highest for pedestrians.”

The report found that vehicle occupants who were not wearing seat belts were 20 times more likely to be killed or severely injured.

There were roughly the same number of crashes for bicyclists in locations where bike infrastructure was present as areas where there wasn’t, but areas without bicycle infrastructure had a higher fatality rate.

“Out of the eight KSI bicyclist crashes,” the report said, “seven had no presence of bike infrastructure.”

The full report is available in the docket (page 31 of the pdf, page 4 of the docket) for the Transportation Commission’s March 16 meeting.