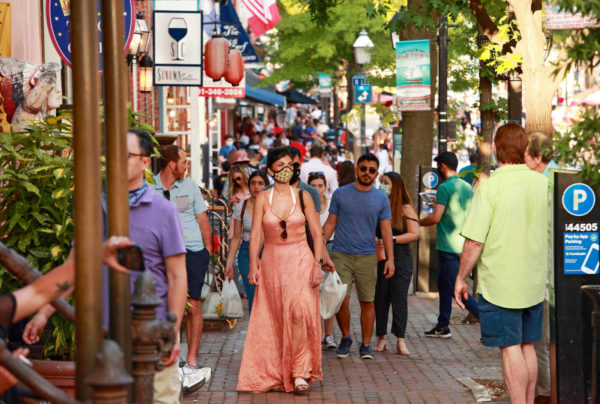 Nicole Burlimann now has a completely different life. Exactly two years ago, she was the food and beverage manager at the Hilton Garden Inn — facing a busy spring full of events. Then COVID hit, her position was terminated and she collected unemployment for months while watching and waiting for restrictions to be lifted and normalcy to resume.

After four months, Burlimann started working part-time at Piece Out Del Ray (2419 Mount Vernon Avenue) when it opened in the summer of 2020. The restaurant is owned by the Ponzi family, and they later promoted Burlimann as general manager at their St. Elmo’s Coffee Pub and Market 2 Market locations in Del Ray.

“I wake up every day feeling very fortunate and thankful to live where I live, to have the support system that I have,” Burlimann said. “Now I just go with the flow. And that’s knowing that it’s so much worse for so many other people… I didn’t think we’d have that second wave that we had. But I am really looking forward to the spring as things are loosening up and an uptick in business.”

Today (Friday, March 11) marks two years since the COVID-19 pandemic was declared by the World Health Organization, and the first case in the city was reported at Virginia Theological Seminary. That two-year period saw Alexandria tread through dramatic social waters with the Alexandria City Public Schools system’s conversion to online learning and eventual return to in-person instruction, local businesses experiencing dramatic closures, demonstrations against police brutality and much more.

To date, there have been 184 reported deaths and 29,809 cases reported in Alexandria. The worst month of the pandemic was just two months ago, as January saw more than 12,000 cases. The numbers of new cases have dropped considerably since then, and restrictions have been loosened to a point of normalcy not seen since March 2020.

Starting this month, face mask mandates were lifted in City government buildings and within Alexandria City Public Schools, and the Alexandria will soon start charging businesses rent for their use of parklets — parking spaces in front of businesses converted to dining areas.

The decision was made after guidance from the Centers for Disease Control and Prevention gave Alexandria and its neighboring jurisdictions a “Low” community level of transmission. Inova Alexandria Hospital has even lifted its visitation requirements. 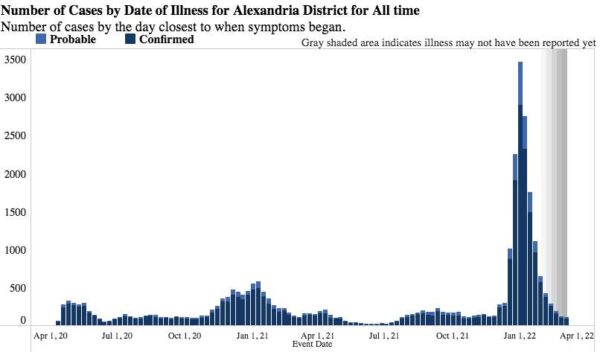 Mayor Justin Wilson, who celebrates a birthday on March 11, told ALXnow that the city is entering into a new phase of the pandemic.

“We’re heading into a different phase that’s a lot closer to normal,” he said. “We’re not going to shut things down anymore because we have vaccines, and we can we can protect those who are vulnerable and make sure everyone else can continue living their lives. But I also think there’s gonna be a lot that will probably never return to normal. And some of that’s okay.”

Wilson says the city was faced with a managing a catastrophic emergency situation without a playbook.

“There was no playbook, there were no rules,’ Alexandria Mayor Justin Wilson told ALXnow. “In the beginning our big ask was going to all of the utilities like Dominion, Verizon, Comcast, and asking if they could give forbearance and not cut off their customers, and they all agreed, which was great. All of our utilities agreed and actually held to that for a long, long time — a year in-plus. Yeah. Then we sent a letter to landlords asking them to not not evict tenants. Early on, there was so much pain and tumult and everything that you were just trying to address and it was like triaging patients.”

The city extended services made possible through emergency federal funds, millions of pounds of free food was distributed by ALIVE!,

Wilson, who contracted the virus in Spain in December, has posted COVID-19 updates on social media every day of the pandemic. That practice that ends today, he tweeted.

Like many businesses, Bill Blackburn and his partner Mike Anderson of the Homegrown Restaurant Group had to furlough employees, get Paycheck Protection Program loans, and figure out how to keep their six restaurants afloat in Carlyle and Del Ray. While his staff are longer required to wear face masks, a number of changes to his businesses are permanent.

“In regard to the last two years, it feels in some ways like it’s been two decades,” Blackburn said. “In some ways, it feels like two weeks. We’ve gone through so many transformations, we’ve had so many false starts. It just seems like that we we’ve constantly been changing. Staff has turned over, styles of service have changed and we have outdoor service tents, outdoor dining, to-go windows, ordering with QR codes, a new point-of-sale system, adding DoorDash and Uber Eats — all these things have just become such a main part of business.” 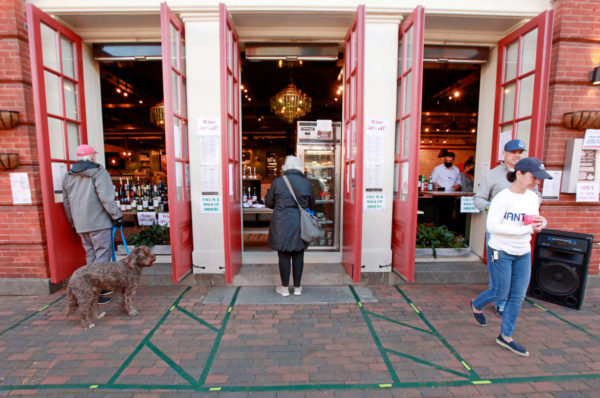 “We’re back to running restaurants again without the complication of the complications of COVID,” Shaw said. “We feel very fortunate to have survived. It was an enormous amount of work by our team. It was just hard work. It was hard work to close the restaurants, and hard work to partially reopen. It was hard work at every stage of the game. We’ve developed a resiliency and, and adaptability that we didn’t know we had.”

Visit Alexandria also predicts that tourism will rebound, but that the hotel industry will continue to struggle.

As for nonprofits, ACT For Alexandria made impressive strides during the last two years breaking records raising millions in their annual one-day Spring2ACTion fundraiser. This year, ACT is asking for $2.5 million for the fundraiser, which is on April 27.

“We have a very generous community, and nonprofits that have been doing incredible work all year,” said ACT for Alexandria’s Brandi Yee. “It’s another chance for community members to support the nonprofits who are still on the front lines helping people who have been affected by Covid.”

Natalie Talis, a population health manager with the Alexandria Health Department, says staff are tired and a little burned out.

“The Alexandria Health Department is still here, whether or not COVID is,” Talis said. ” We will always be that important resource for helping to provide guidance to businesses, to nonprofits, to faith-based entities, as well as to residents, in terms and what are those best ways that you can protect yourself and the people around you.”

Alexandria remains in a state of emergency until June 30.

Effective March 11, we will have expanded hours for visitors.

• Visitors must be 16 years or older
• Everyone must wear a surgical/medical-grade face mask at all times. Mask will be provided if needed. Info: https://t.co/n7ZkvDWXhG pic.twitter.com/qM24IMa0Jp