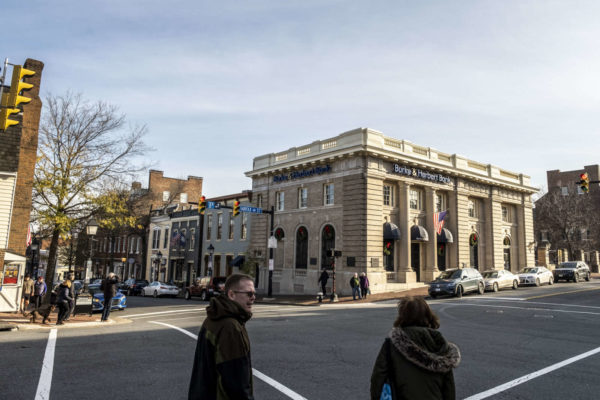 “We’ve approved just about 400 loans,” Boyle told ALXnow. “We have about 1,000 applications, so we have 600 or so that are still pending in various forms and we started actually closing and funding loans this week. So the money’s actually finding its way into the borrowers’ checking accounts and such this week.”

Boyle said the bank has pooled staff resources to attend to the loan applications. Additionally, the bank has frozen principal and interest payments for some business borrowers, in addition to freezing mortgage payments for other customers.

“Most disaster plans are set up for a week or two of disruption, and we’re now in week three or four of this with another three or four weeks potentially to go,” Boyle said. “People are signing up for digital banking services in record numbers. So, it’s changing the way the consumer is dealing with the banks as well.”

Boyle added, “We’re being as accommodating as we can be for these folks with the understanding that this is going to pass and there will be some return to some sort of economic positive economic flow at some point.”

Burke and Herbert was founded in 1852 and operates 25 branches throughout Northern Virginia, including its flagship location at 100 South Fairfax Street in Old Town. The bank has been forced to close its lobbies, and branch locations are only open for customers who make appointments. Additionally, Boyle said, about 35 staffers [about 7% of his workforce] have taken extended medical leaves to take care of their families, and most staff are working remotely at home.

“We were not hit flat-footed,” Boyle told ALXnow. “There are things that are not the same, but it’s not too dissimilar from a natural disaster or a problem that interrupts our business.”

Boyle said that traditional lending is still going on at the bank, and that it will withstand this economic crisis.

“We have the dry powder, if you will, to withstand some very tough economic stress, and the bank has been around since before the Civil War, survived World Wars and depressions,” Boyle said. “It’s a very conservative company and very well capitalized and very liquid. If our customers needed their money for whatever reason in a George Bailey scenario, we have a way to meet those needs. If there is a desire for our customers to take large sums of money out of the bank we can meet those needs.”

Still, Boyle said that he’s spending a lot of sleepless nights worrying about how COVID-19 is impacting customers, employees and the bank.

“If this went on for another three months, six months… Most economic downturns last 18 to 36 months and we’ve weathered how many of those so we’re going to be fine,” Boyle said. “We’re gonna be fine and we may find ourselves at some point having to be a little more restrictive on lending.”

We’re here for you during this challenging time. If you’re a Burke & Herbert Bank consumer or small business loan…