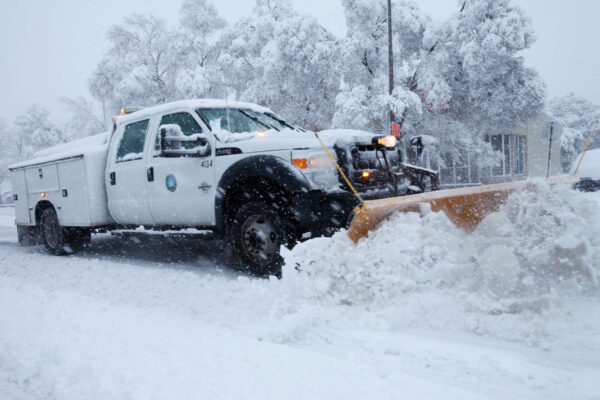 A day after 10 inches of snow was dumped on the region, 95% of Alexandria’s primary roadways are now “passable”, according to the City’s Department of Transportation and Environmental Services.

The Department also tweeted that 65% of the city’s secondary streets are passable, and that crews are working toward intermediate streets. There are also still three open requests to clear away snow from the city’s Arlandria neighborhood, according to the city.

The storm led to a two-day closure of the city government and virtual learning for Alexandria City Public Schools.

Still, the Alexandria Fire Department says the were no “unusual” storm-related calls for service.

“Like our neighboring mutual aid partners, AFD was very busy on Jan. 3 during the heavy snow,” AFD Senior Public Information Officer Raytevia Evans told ALXnow. “With our Logistics Section running the snow plow and our maintenance shop available to work through any mechanical issues that came up, we were able to work through delays due to the weather.”

Evans continued, “There were no particularly unusual calls related to weather, but the department remained busy throughout the day.”

ROADS UPDATE: City crews report that 95% of primary roads are now passable, with 65% of secondary streets passable. Crews are now beginning to move into intermediate streets in some zones. To check the status of snow removal, please visit https://t.co/4s2mRN4Wir. pic.twitter.com/kxkWTsibg1

Alexandrians- I am going to ask the City Manager & head of @AlexandriaVATES to give council & community a briefing on Snow Storm response at an upcoming mtg, so that we understand the complexities of our city staff's coordinated response & know what to expect for & after snow. https://t.co/8iranIecZm