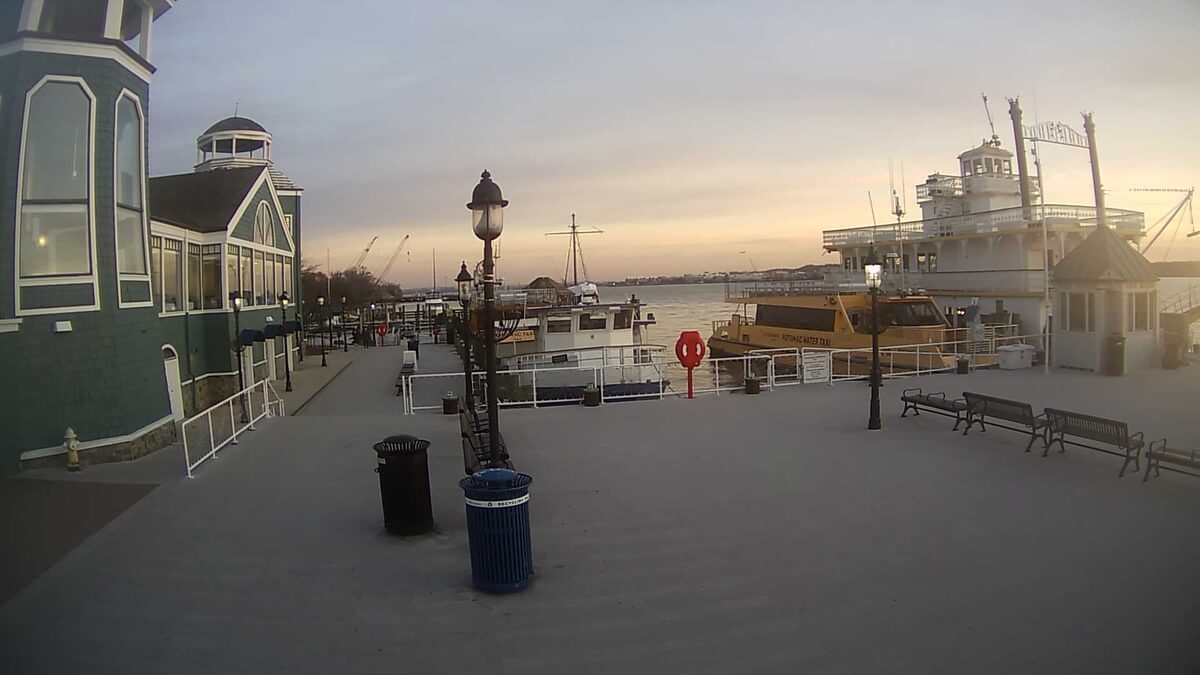 🚨 You need to know

A new bill could mean the end of snow days for Virginia public schools.

Currently, during severe weather conditions, schools have the option to switch to remote learning. House Bill 1666, pre-filed yesterday by Del. Danny Marshall (R-Danville) would change that to a requirement rather than an option: school divisions must declare unscheduled remote learning days to provide instruction and student services.

The school divisions are also not allowed to claim more than 10 unscheduled remote learning days per year without an extension granted by the Superintendent of Public Instruction.

While snow days are forever popular among students and teachers, the change is likely spurred on by concerns about learning loss in Virginia students over the last few years. Before disheartened teachers and students start shaking their fists at the state legislature, it’s worth noting that Alexandria City Public Schools had already started moving in that direction. 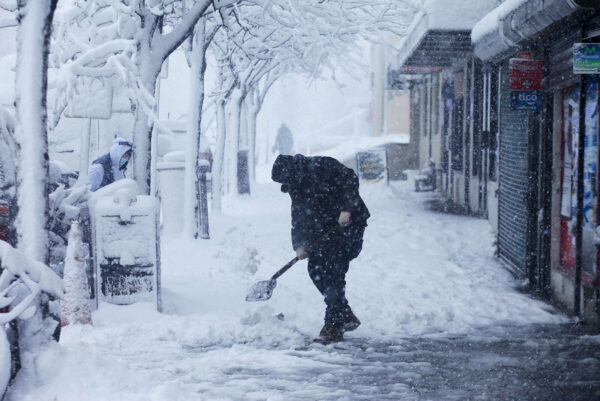 The following are the most-read ALXnow articles for Jan 9, 2023.

The traffic signal at the intersection of Richmond Hwy and E Reed Ave was knocked down and is currently not working. Crews are on site making the necessary repairs and directing traffic. Please use caution while traveling through this area. Stay tuned for more updates. pic.twitter.com/qu7zYv7eVR

For half of a century, dedicated volunteers in the Alexandria community have been organizing an annual observance of the life and legacy of the Rev. Dr. Martin Luther King Jr.

This year marks the 50th observance and we would like you to join us this Sunday afternoon. pic.twitter.com/LdHF9f7lSC

It's #happytails for Malt, one of our longest-term residents, who found his family in late December. They share that he is already flourishing with them, gaining confidence every day and even hanging out with his new feline siblings. Congratulations to Malt and his new family! pic.twitter.com/oEWjuTsiku

Here is what’s going on today in Alexandria, from our event calendar.

The Virginia Department of Transportation (VDOT) says drivers heading out for the holidays should consider starting a little early, with heavy storms likely to affect travel over the next few days.

In an alert, VDOT said today is the best day to travel, given the forecast.

“Drivers should expect roads to be impacted Thursday and Friday,” VDOT said. “Today will be the best day for holiday travel. Adjust travel plans and avoid all nonessential travel during the height of the storm. This helps to avoid deteriorating conditions and to allow crews room to work.”

Please continue to monitor forecasts closely as forecasts can improve or worsen quickly. The National Weather Service forecast shows winter weather will impact the region from overnight Wednesday through Friday. The forecast shows the potential for periods of freezing rain and sleet, as well as below-freezing temperatures, heavy rain, and high winds. A Winter Weather Advisory has been issued for western Loudoun County starting at 4 a.m. Thursday.

Additionally, the National Weather Service has issued an areal flood watch for Alexandria, advising locals not to drive through water on roadways and to avoid small streams. 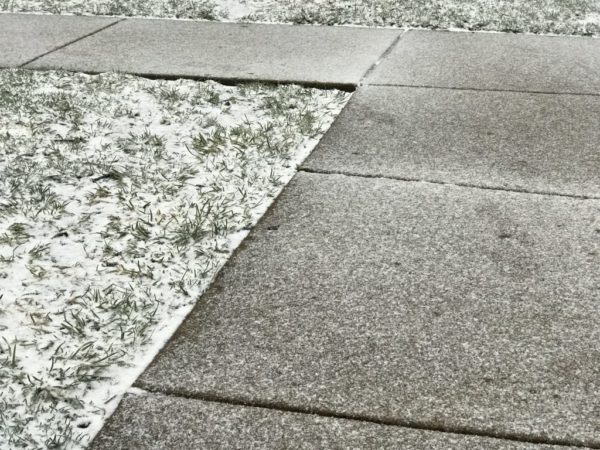 Snow started falling at around 2:45 p.m. on Friday (Jan. 28) in Alexandria, as the city remains under a Winter Weather Advisory until 4 a.m. Saturday.

The National Weather Service says that the snow could lead to slippery road conditions for the evening commute. One inch of snow is expected.

“The steadiest snow is expected late this afternoon through this evening,” NWS said in the advisory. “Plan on slippery road conditions. The hazardous conditions could impact the evening commute.”

Temperatures are expected to fall to 23 degrees this evening. 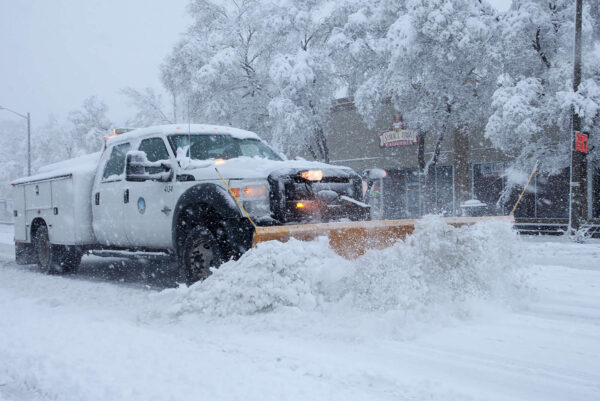 Alexandria City Public Schools will provide synchronous, virtual learning Thursday after a Winter Weather Advisory warned there may be 2 to 3 inches of snow in the morning.

Class times will include live instruction through Zoom and independent work. All essential personnel must still report to schools, if it is safe to do so.

ACPS advised parents to check students’ Canvas or Clever account no later than 8 a.m. Thursday for specifics about their schedule.

ACPS has implemented virtual instruction for some inclement weather days this year, possibly making snow days a thing of the past. Fairfax County Public Schools similarly announced it would go virtual Thursday as well. And in Arlington, a full school closure was announced for tomorrow, using its last traditional allotted snow day. 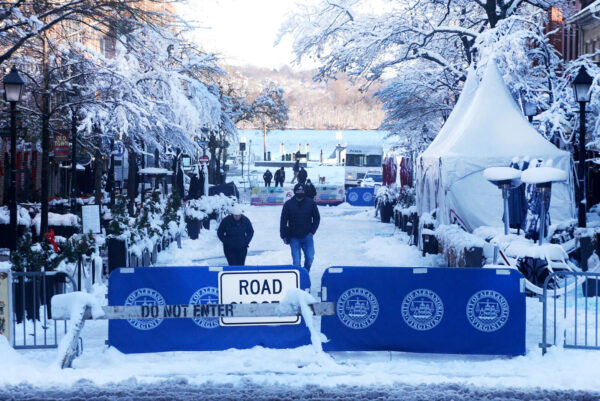 The National Weather Service has issued a Winter Weather Advisory for Alexandria and its neighbors ahead of snow expected tomorrow (Thursday) morning.

The advisory is set for 6 a.m.-1 p.m. on Thursday morning, with the city expected to get two-three inches of snow in the morning with a chance for more in the afternoon.

If it does snow, it will be the third snow of the year for Alexandria. The city received a fairly light dusting this past weekend that followed a severe snowstorm earlier this month.

See the full advisory below:

* WHAT…Snow. Snow accumulations of up to two inches with locally
higher amounts around three inches possible.

* WHERE…The District of Columbia, portions of central, northern
and southern Maryland, and central and northern Virginia.

* IMPACTS…Plan on slippery road conditions. The hazardous
conditions will impact the morning commute.

* ADDITIONAL DETAILS…Precipitation will start as rain and then
switch over to snow during the Thursday morning commute.
Instructions: Slow down and use caution while traveling. When venturing outside, watch your first few steps taken on steps, sidewalks, and driveways, which could be icy and slippery, increasing your risk of a fall and injury.
Target Area:
Arlington, Falls Church, Alexandria
Fairfax
Prince William, Manassas, Manassas Park
Southern Fauquier
Spotsylvania
Stafford

NWS has issued a Winter Weather Advisory for the City of Alexandria, effective until 1 p.m. Thursday, Jan. 20. Find information about how to prepare for winter weather. https://t.co/76kuTJasQf

Nearly a fortnight after a snowstorm shut down Alexandria, the city’s emergency services finished pretreating local roads just before the snow started to fall.

“In advance of the storm, T&ES completed pretreatment of roads and snow response operations were deployed at 7:00 a.m.,” Alexandria Transportation and Environmental Services said on Twitter. “Snow response operates for 24 hours through the duration of winter weather events and staff will continue to monitor the weather conditions as the event ensues.”

Locals are already reporting that the snow is starting to stick.

Snow has started in the Northern Virginia District! ❄️ Take a virtual tour via our traffic cameras from our southernmost District point (Russell Rd/Quantico South Gate) up to near the Mixing Bowl. It’s a great time to stay off the roads! pic.twitter.com/PXmXd2lwQ9

A Winter Weather Advisory is in effect for Alexandria and the immediate D.C. area.

* WHEN…From 1 PM this afternoon to 1 AM EST Monday.

Slow down and use caution while traveling.

When venturing outside, watch your first few steps taken on steps, sidewalks, and driveways, which could be icy and slippery, increasing your risk of a fall and injury. 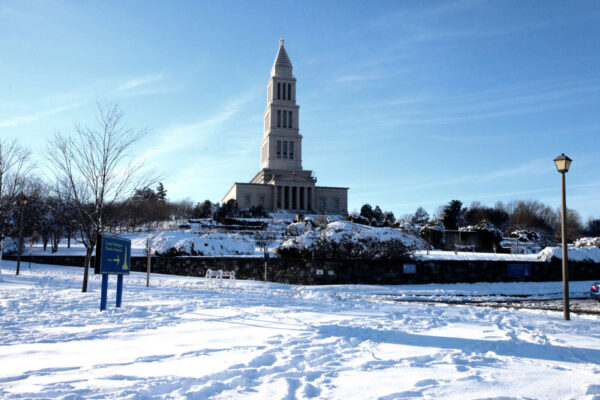 The big story this week was snow.

A snowstorm on Monday had the city working at clearing roads and putting weather-affected services back into play. There was a smaller dusting of snow last night, though it didn’t have nearly the same level of impact.

Alexandria City Public Schools went virtual for the first three days of the week as well. Thursday was closed for students as a teacher workday, and both teachers and staff had today off.

Of course, Alexandria wasn’t alone in dealing with the snowstorm: similar operations were underway this week in Arlington and Fairfax. 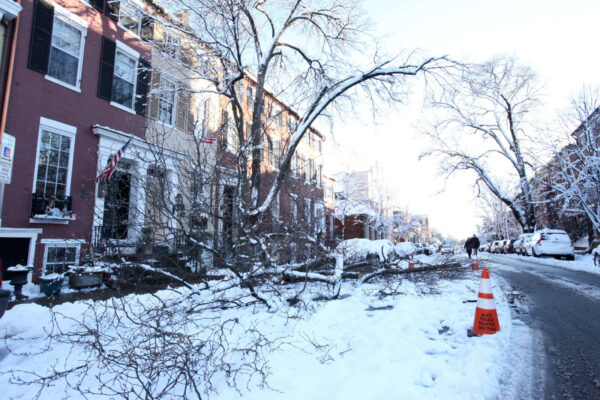 Trash and recycling collection has been suspended for the rest of the week as the city prepares for potential snow tonight just days after Monday’s snowstorm.

The city has previously said trash collection days would operate a day or two behind schedule, but a press release from the City of Alexandria today noted that the city is dealing with a perfect storm of issues hindering trash-recovery operations.

“Due to staffing shortages caused by COVID-19, safety issues related to the forecasted overnight snow and to prioritize resources to prepare for and respond to the inclement weather, curbside recycling, trash, yard waste and Christmas tree collection will not take place this week,” the city said in the release. “There will be no sliding of routes and days as previously communicated. Collection crews will be mobilized tonight and tomorrow to support and respond to the forecasted snow tomorrow.”

The city asked that residents hold their trash until collection resumes next week, but for urgent disposals, the city said residents can drop off small amounts of trash free-of-charge at the COVANTA Waste-to-Energy Facility (5301 Eisenhower Ave.) Monday through Friday from 6 a.m.-5 p.m. and Saturday from 6 a.m.-11:30 a.m. The city noted those hours could change based on weather conditions. 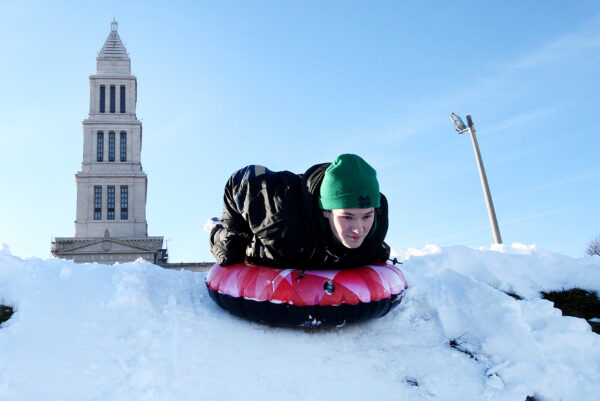 It was the best of times and the worst of times for many Alexandrians this week.

Monday’s snowstorm shut down many services around the area — delaying trash pickup, canceling bus service, and more — but also offered some winter fun around Alexandria.

Alexandria students didn’t quite get snow days on Monday, Tuesday or Wednesday — with Alexandria City Public Schools going to virtual learning — but students had today off while staff still had to work.

If you’re more in the anti-snow camp a word of warning: there’s more expected tonight. 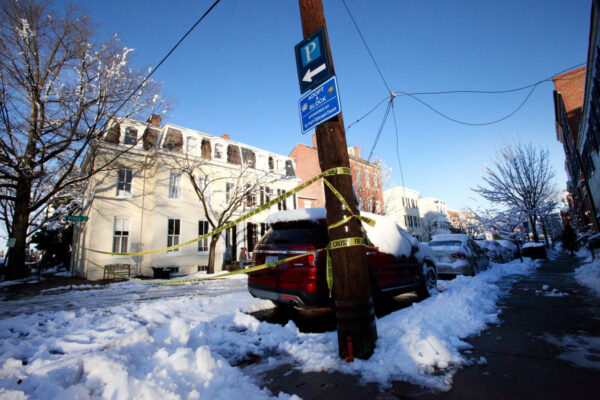 Just three days after a snowstorm hit Alexandria, the National Weather Service (NWS) has issued an advisory that more snow could be incoming tomorrow night.

The NWS warned to expect a total snow accumulation of around 2-4 inches, with isolated amounts of 5 inches possible and the heaviest snowfall expected between 10 p.m. and 2 a.m. The advisory covers much of the D.C. area, including Alexandria.

* WHERE…The District of Columbia, portions of northern and central Maryland, and northern Virginia.

* ADDITIONAL DETAILS…The heaviest snow is expected between 10 PM and 2 AM when snowfall rates of 1 inch per hour are possible.

Slow down and use caution while traveling.

When venturing outside, watch your first few steps taken on steps, sidewalks, and driveways, which could be icy and slippery, increasing your risk of a fall and injury.

Winter Weather Advisories and Warnings have been posted for Thursday night into Friday morning. For more information regarding this event, see our winter weather page at: https://t.co/FdluCAnbTi #DCwx #MDwx #VAwx #WVwx pic.twitter.com/dfFj47cQZX