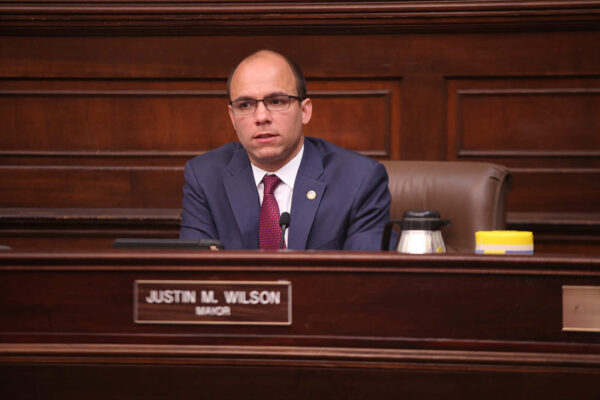 After two years of euphoria with a Democratic majority in the legislature and a Democrat governor, local Democratic leadership are bracing for the other shoe to drop after Republicans won the governor’s seat and secured a tie in the House of Delegates in the election on Tuesday.

Alexandria Mayor Justin Wilson, a Democrat who just won re-election along with the full slate of Democratic candidates in the City Council race, said those last two years have been a boon for the city.

“The thing that has been very good over the last couple of years has been the General Assembly, which has taken a very permissive approach for policymaking at a local level,” Wilson said. “Some of the things we worked on in the last year were things that came out of that permissive authority — regulating firearms on public property, collective bargaining, the framework for the police review panel. Those were all things that came out of state code to do things we couldn’t do before.”

With changes in the state leadership, Wilson said the glory days of the city getting its way in financial and legislative matters could be drawing to a close. The big concern, Wilson said, comes in the budget. Over the last two years, the city received state funding for the combined sewer project, flooding issues, education and more.

“From a financial perspective, [the state’s] been really good to the city,” Wilson said. “Money has to be at the top of the list [of concerns]… financial support and how that’s distributed Not having leadership that is attuned to our issues in Northern Virginia is a concern. Youngkin’s from Northern Virginia so hopefully, he has some empathy for us and can help us, but we’ll see… We’re going into a very different situation right now. It’s very concerning. There are opportunities, though, and I have to be positive about the places where we will work together.”

One of those areas, Wilson said, is pushing for Dominion to invest more heavily in reliability. The city has been plagued with several severe power outages over the last few years, most notably one that derailed the Art on the Avenue Festival — hitting at a time when keeping the lights on couldn’t be more critical for some local businesses.

“The Governor-elect has talked a great deal about Dominion and the fact that further reform is needed there, and we feel that way for sure,” Wilson said. “So hopefully, we’ll have a partner there in those efforts.”

Wilson also said he’s hopeful that bi-partisan comprehensive tax reform could help Alexandria have more independence in how it raises and allocates taxes.

“I’m hopeful for that kind of effort,” Wilson said. “I hope it provides more local control for how we raise revenue. We have to be as optimistic as we can. We’ve had an extraordinarily close relationship with the outgoing administration.”