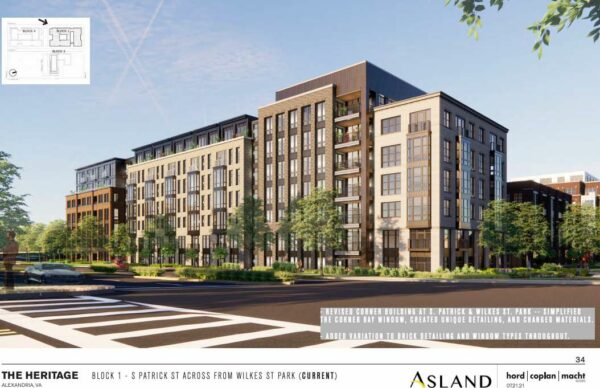 (Updated 4:45 p.m.) After being denied a certificate of appropriateness from the Board of Architectural Review (BAR), Old Town PropCo LLC is taking the case for The Heritage project to the City Council.

The Heritage is a project that will replace four buildings in southeast Old Town ( 900 Wolfe Street, 450 and 510 S. Patrick Street, 901 Gibbon Street, and 431 S. Columbus Street) with three new apartment buildings. It’s attracted some criticism from neighbors close to the project, but was eventually unanimously approved by the City Council.

Designs for the new project were roundly criticized at the BAR for being inconsistent with the scale, mass, and general character of its neighbors around Old Town. A certificate of appropriateness for new construction, typically one of the early first steps toward approval of a project, was deferred and later denied by the BAR. The BAR has been critical of the project nearly every time it’s come to the board, with some calling it “lipstick on a pig” during one early discussion.

According to a notice from the City of Alexandria, Old Town PropCo LLC’s appeal for the certificate’s denial is scheduled for Saturday, Nov. 13. Members of the public wishing to speak on the topic are encouraged to register online.