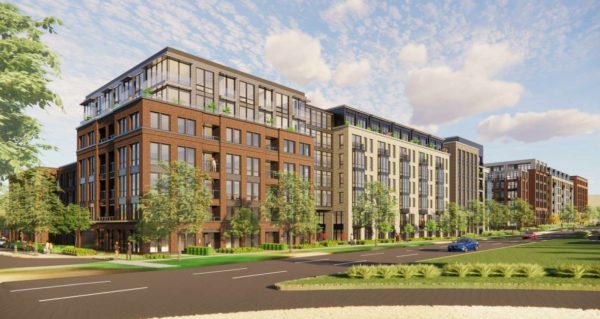 A long public hearing — and extended public debate in online forums and city meetings — over the controversial Heritage project ended with an unanimous vote approving the project.

Many on the City Council expressed reservations, including issues of size, increased traffic and additional burden on schools. Ultimately, however, the addition of new affordable housing units was an offer the Council felt it couldn’t refuse.

The Heritage is a project that will replace four buildings in southeast Old Town along S. Patrick and Washington Streets with three new apartment buildings. The project attracted controversy for its height and density — up to seven stories tall with 750 units — and earlier renderings were described by the Board of Architectural review as “lipstick on a pig”.

The project was widely criticized by members of the community, to the point of some residents creating a webpage dedicated to opposition and former Mayor Allison Silberberg weighing in against the project. Opponents said the buildings were too large for the site and would add more residents than the local infrastructure could support. Over 62% of respondents to an ALXnow poll on the topic had an unfavorable view of the project.

(Note: much of the public comment on the project was not available online at time of writing)

These criticisms found some support from the Council. City Councilwoman Amy Jackson expressed many of those same concerns, though she ultimately voted in favor of approval.

“You have [Historic Alexandria Resources Commission] and other commissions coming to us saying they don’t agree,” Jackson said. “It’s a mega-sized environment being placed on a footprint that is much smaller than what we are about to put on it. We have enrollment issues, [children here] will be in learning cottages. You have a bigger footprint showing that we now have stormwater and drainage issues.”

Jackson said that a pre-COVID traffic study done early last January did not reflect the perspective of many, herself included, who sat in heavy traffic already near the site.

“We’re going to have a lot of problems concerning traffic,” Jackson said. “I’ve sat in that line for 5-10 minutes trying to get off Gibbon street to get on Route 1. I don’t know how you’re going to put another 400 units on that property and have it all go well.”

But others, like City Council members Canek Aguirre, Del Pepper, and John Chapman said the opportunity to gain 57 units was too rare to pass up.

“This is an opportunity for the city to save housing in this area,” Chapman said. “There are issues in that neighborhood with stormwater and traffic… [but] it needs to be on us to make those areas ready for development. We’re struggling to capture [housing], to retain it, so [having] the oppurtunity to create?”

Jackson called into question whether the gain in affordable housing was worth the concerns expressed by members of the council and the community, but the answer for other members of the governing body was: yes.

“This is a difficult vote to make,” Pepper said. “I think of all the times we’ve been excited to get two units, teeny weeny units. But here we have a chance to add to what’s here. We desperately need every affordable unit we can get, that is for sure. I have friends who are not able to stay in the city and they don’t know what to do. They need to be in the city because of their jobs and they stay awake at nights wondering how they are going to pay their bills. Here is one more opportunity to help not those folks individually, but in general.”

END_OF_DOCUMENT_TOKEN_TO_BE_REPLACED

More Stories
The Alexandria Drive-In is Back with 10 Movies in MarchPatrick Moran, Son of Former Congressman Jim Moran, is Running for City Council