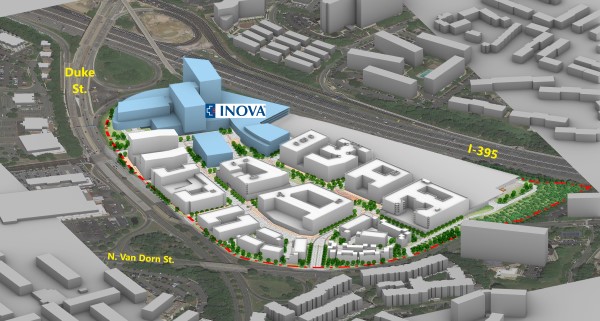 The sweeping redevelopment of defunct shopping center and Wonder Woman setting Landmark Mall cleared a major hurdle last night as the City Council approved some early financing and plans for the site.

The unanimous approval with little discussion on the City Council was in sharp contrast to a contentious meeting with the Planning Commission, the latter of the approval additional environmental requirements.

In addition to a broad approval of the redevelopment plans for Landmark, which will replace the mall with a new Inova hospital and mixed-use development across the 52-acre site, Council also approved $160 million in bond financing for “improvements, land acquisition and capitalized interest in connection with the development and redevelopment of a regional commercial and retail center known as Landmark Mall.”

It’s still the beginning of a long process, with work at the site not expected to start until the third quarter of 2022, but Council still celebrated the small win that has been decades in the making.

“We have been through so many different owners of this property and each time I would keep saying ‘the West End will rise again,’ and now the West End has every opportunity of rising,” said Council member Del Pepper, who has been a longtime advocate for development in the West End and Landmark Mall in particular. “It will be an opportunity where others up and down Van Dorn and all around can be thinking about whether there’s something new they want to do with their property to maybe improve things or expand. Look out, Del Ray and look out Old Town — the West End is on the move. We will be the place to visit when you want to have a good time, get a good bargain, or have good service.”

Mayor Justin Wilson agreed, saying this will be a catalyst project for the West End, and laughed that it met with less controversy and discussion at the City Council than earlier discussions about dog barking in city code.

“We spent longer talking about dogs barking than the most transformational investment in our city in a couple generations,” Wilson said.