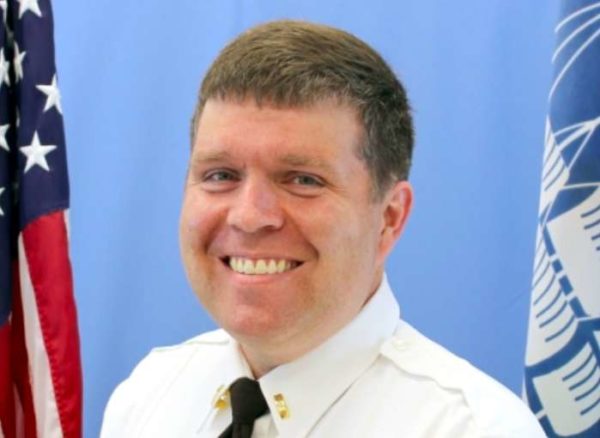 Three minutes before polls closed on June 8 — the day of the Democratic primary — Captain Sean Casey was at the City’s Office of Voter Registrations and Elections. He wanted to see if anyone was running against him for sheriff.

It was slightly anticlimactic.

Registrar Angie Turner told Casey at 6:57 p.m. that he had three minutes to find out if he had an opponent, but that up to that point nobody else filed to run against him. So, they waited there until 7 p.m. and then Turner told him the good news: He is running unopposed in November and will replace retiring Alexandria Sheriff Dana Lawhorne.

“I basically stood next to her for the next three minutes until 7, and that was it,” Casey said.

The 39-year-old Casey then made some phone calls, sent out a few texts, and, before going home briefly stopped by City Councilwoman Amy Jackson’s house to watch the initial returns come in.

Even though he’s already won, Casey says he will still act like a candidate.

“I’m still going to take the opportunity to go knock on doors,” he said. “I’m still going to go to farmers markets events. I’m still gonna look for opportunities to engage with the constituency. There’s a bunch of people that don’t know me, but I want them to know me and people don’t know what the Sheriff’s Office does, and that and that’s something that I really want to change.”

A lifelong Alexandrian and graduate of T.C. Williams High School, Casey joined the Sheriff’s Office in 2017 after a 14 year stint with the Alexandria Police Department. He’s currently the commander of the Administrative Services Division and is responsible for human resources, internal investigations, accreditation, community relations and the office’s COVID-19 response.

As for the office vibe now that he’s essentially the sheriff-elect, Casey said that nothing much has changed.

“All the staff are being very supportive,” he said. “I have no doubt that when the time comes and the transition actually happens it will be a smooth and seamless transition.”