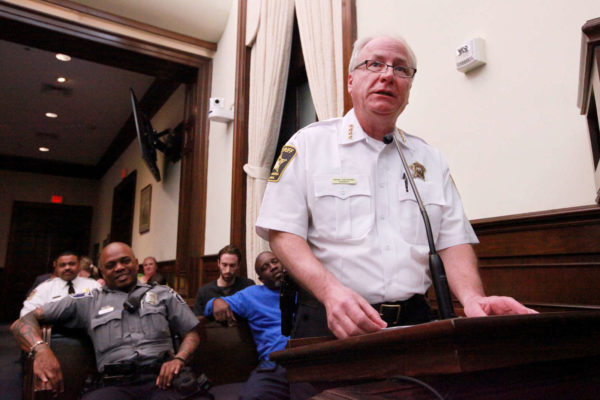 Alexandria Sheriff Dana Lawhorne will not seek a fifth term, and will leave office at the end of the year.

Lawhorne made the announcement this afternoon, and said that after 16 years he accomplished his goals in office.

“Following 43 years of public service, I have decided to retire at the end of this year when my current term expires,” Lawhorne said in a statement. “This is a difficult decision because it is hard to leave a job that you love and are still passionate about. I have known since I was 14 years old that this is what I wanted to do, and there was not one day where I wasn’t grateful to have this opportunity to serve my city.”

The 63-year-old sheriff is a longtime devotee of the Andy Griffith Show, and often likened Alexandria to the fictional town of Mayberry. He said that his legacy will be the way that he treated others. He spent 27 years as an Alexandria police officer and detective and was elected sheriff in 2006. He also, on occasion, sparred with city officials on issues.

“From the time I began my law enforcement career, I never lost sight of what it was like to walk in someone else’s shoes, from those who needed police assistance to those who were entrusted into my care at the detention center,” Lawnhorne said. “Thank you, Alexandria, for your trust and support. It has indeed been my honor and privilege to serve.”

“We have the best Sheriff in Virginia,” Wilson told ALXnow. “He has ably led a complex agency during a period of significant transition. Dana is as committed to public service as anyone who has served this City. He has invested in the men and women who serve his agency and our community, and has advanced programs to ensure the rehabilitation of those placed in his charge. Our City is better off for his lifetime of service and I wish Dana and Linda well in retirement.”

Lawhorne thanked his wife, Linda, and his daughters Megan, Christine, and Mallory for their support. He also thanked Undersheriff Tim Gleeson for 40 years of professional friendship, as well as his staff.

“Linda and I will continue to be active members of our beloved hometown, but we are also looking forward to spending more time with our grandchildren, Ryan and Harper,” Lawhorne said.

Lawhorne listed the following accomplishments during his time as sheriff.

The democratic primary is June 8, and the filing deadline for candidates is March 25 at 5 p.m. No candidates have yet filed to run for sheriff.