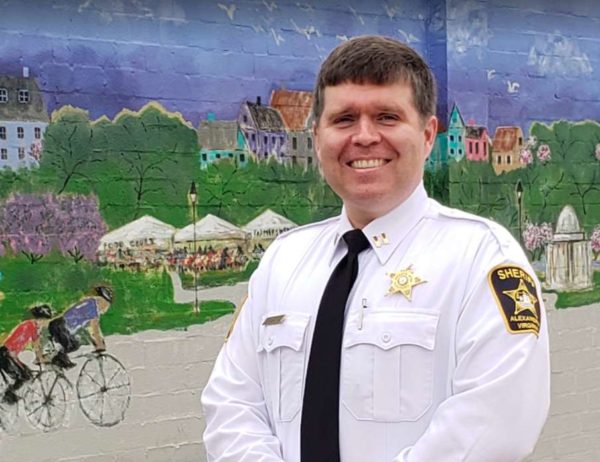 Captain Sean Casey is running for Alexandria Sheriff, and already has the endorsement of retiring Sheriff Dana Lawhorne.

The 39-year-old Casey joined the Sheriff’s Office in 2017, and is the commander of the Administrative Services Division. In that role, he’s responsible for human resources, internal investigations, accreditation, community relations and the office’s COVID-19 response.

A lifelong city resident, Casey grew up in the Seminary Valley neighborhood in the West End. He’s a 2000 graduate of T.C. Williams High School and received a degree in psychology in 2004 from Virginia Tech. He joined the police department shortly after graduation, and first met with Lawhorne, who was then a detective, as he was working an off duty job keeping the Hoffman parking lots safe along Eisenhower Avenue.

“We met, we talked, and he’s like, ‘You’re gonna be a great police officer, and I’m gonna do whatever I can to help you get hired,'” Casey said. “And he did exactly that. You know, there’s only one Dana. Everybody knows that. He’s a unique guy, has an amazing personality, can get a laugh out of pretty much anybody.”

Casey says his commitment is exemplified by an event that happened shortly after he became a cop. He was stabbed multiple times.

“It happened while I was trying to apprehend a burglary suspect,” he said. “And it was a it was a very difficult experience and challenging, but I overcame it. I was undeterred, and I wanted to continue just an example of my commitment to serve the community.”

Casey left the police department for the sheriff’s office in 2017. While he’s talked with Lawhorne about being his successor for years, the move became a reality only in the last few weeks.

“Dana said he didn’t think he was going to run for reelection, and looked at me and said that I better get ready,” Casey said. “I’ll be honest, it did come a little surprise to me, but I took his advice. I’m ready to step in and do what Dana has done for the city and for the office, and also put my own stamp on it as well.”

Lawhorne, who recruited Casey to be on his leadership team, has formally endorsed him.

“Sean had a distinguished career with the Alexandria Police Department where he constantly demonstrated and proved his excellent leadership abilities,” Lawhorne told ALXnow. “Four years ago I asked him to assume a leadership role in the Sheriff’s Office. He was given the responsibility of complete oversight of our Administrative Services Division which includes leading our response to the Covid pandemic. I endorse Sean because I know he cares about everyone and to me that’s what matters the most.”

He filed his paperwork with the city’s registrar on Monday, is launching his campaign website today (Tuesday) and plans to run as a democrat in the June 8 primary. This Sunday, he will formally launch his campaign on Zoom, and will get the backing of Lawhorne, Commonwealth’s Attorney Bryan Porter and City Council members John Taylor Chapman and Amy Jackson.

Casey’s first priority is getting past the pandemic, and then he’d like to redevelop the work release program for inmates and the Sheriff’s Office cadet program so that 18-year-olds can become employees.

“COVID-19 is one of the biggest challenges we’ve ever faced,” Casey said. “With over 270 inmates who are in close contact with our staff or employees, we’ve got to get ourselves safely and effectively out of the pandemic.

Casey lives within a block of the home he grew up in on the West End with his wife, Amanda, and two children.

“I love Alexandria,” he said. “It’s got this small town feel. I feel like Dana, where I get outside of the Alexandria city limits, and you can ask my wife, because after about an hour or so I don’t feel comfortable anymore and I want to come back. I don’t know what it is.”