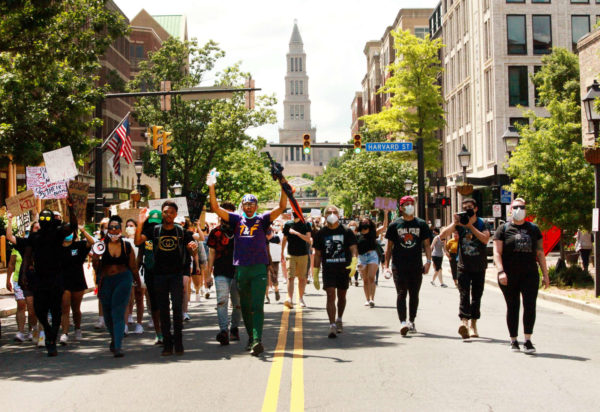 A number of Alexandria politicians support the guilty verdict against last year’s murder of George Floyd.

Mayor Wilson that Floyd’s memory will be honored in Alexandria when it improves the inequities associated to wealth, education, housing, health and injustice experienced by residents of color.

“We have a lot of opportunities to attack some of these systems that exist in our city that unfortunately prey upon the Black and brown residents of our city,” Wilson said in a candidate forum last night. “I proposed, with the support of all of my colleagues, to eliminate fares on our DASH bus system to help our transit-dependent residents in a significantly challenging time, which is a way that we can bring equity to that system.”

Wilson continued, “I’m proposing that we decriminalize some of our quality of life infractions that right now we send our police out to enforce areas that are primarily problem mediation opportunity. I want to get rid of escalating fines that criminalize poverty for a lot of our residents.”

Floyd was killed by then-Minneapolis Police Officer Derek Chauvin on May 25, and the video of his death sparked outrage throughout the country, including in Alexandria. Portions of the city were shut down during the summer for protests and vigils, and the event even turned the spotlight on the Alexandria Police Department.

Police Chief Michael Brown said last year that he was appalled by the video that showed Chauvin kneeling on Floyd’s neck for eight minutes.

“I witnessed a homicide at the hands of a cop, and the victim of that homicide was Mr. George Floyd,” Brown said. “I had a very difficult time processing what I saw in that video, and it brought back a flood of memories from my youth in the 1960’s and various times throughout my career working with cops.”

Former Mayor Allison Silberberg, who is running against Wilson for the democratic nomination, said, “Thank God justice has been served.”

Councilman Canek Aguirre said that the guilty verdict is the first in a long list of steps that need to happen.

Councilman Mo Seifeldein tweeted that the conviction was an appropriate judicial outcome.

“Many victims of law enforcement brutality do not get access to justice due to a system that protects the bad actors,” Seifeldein said. “I am mindful of the resources and the public outrage that led the authorities to give this case its due consideration.”

City Council candidate Patrick Moran said that Floyd’s murderer would have gotten away with it 50 years ago when his father moved to Alexandria,.

“My dad moved to Alexandria 50 years ago to Del Ray,” Moran said. “It was redlined. There were no cell phones, let alone cameras on them. George Floyd would have been murdered by a policeman who would never have had a trial, let alone a conviction… So much injustice by the white folk that continue to keep the black folk in their place.”

Accountability for the murder of George Floyd is a start.

True justice will take quite a bit longer.

END_OF_DOCUMENT_TOKEN_TO_BE_REPLACED

More Stories
Morning NotesRestaurants, salons, laundromats and other businesses for sale in Alexandria