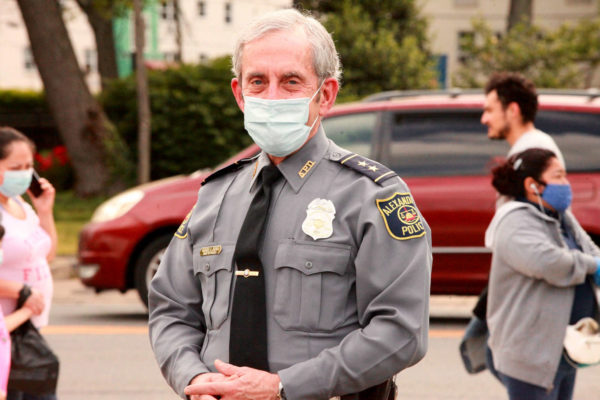 This morning (Monday), Alexandria Police Chief Michael Brown shared an open letter to the community sharing his outrage at the death of George Floyd, who died in Minneapolis after a white police officer pressed his knee down on the man’s neck for eight minutes.

The letter is posted below without edits:

Last week, I too watched a video that shocked me in many ways.  Personally and professionally, I was appalled at what I saw.  I witnessed a homicide at the hands of a cop, and the victim of that homicide was Mr. George Floyd.  I had a very difficult time processing what I saw in that video, and it brought back a flood of memories from my youth in the 1960’s and various times throughout my career working with cops.  I have publicly shared the following perspective with community leaders and in open conversations with the public over the past few days.

There is no excuse for the violence I observed in that video.  Human life is to be treasured, not discounted or taken for granted.  My parents taught me that at an early age and it was reinforced through my faith.  Yet, I struggled with the images I saw in the video.  I was not alone in the thoughts I was harboring.  I spoke with many of the members of the Alexandria Police Department and discovered they shared the same feelings – mostly anger.

My anger at Mr. Floyd’s death comes from several directions.  First, he was a human being and another soul.  No individual should suffer these consequences in the manner in which Mr. Floyd did.  Mr. Floyd also was killed by a police officer.  Many people will make the connection that police officers do this all the time.  Yet, I do know that officers I have had the privilege to serve with are, like me, very angry at the police officer that killed Mr. Floyd and the other officers who failed to respond to Mr. Floyd’s pleas for help.  Finally, I am confounded by the fact that this homicide has once again peeled off the bandage on a long-existing issue of equity in our society, one that has continued without adequate intervention.

It is time now for us to witness the justice that Mr. Floyd and his family deserve.  They need to know that many law enforcement professionals are appalled at what they witnessed.  They also need to know that I and others in the law enforcement community are willing to help address the societal equity issues that are, once again, in the forefront of the discussion.  It is my sincere hope that we finally address these issues – in policing, in the criminal justice system, and the socioeconomic arena.  We need to heal!

The Alexandria Police Department is proud to be a 21st Century Policing agency because it is all based on respect for others.  We do and have done a lot of things to move forward as a professional organization.  One thing I consistently ask myself and others in the Department is “do you have the heart to be a police officer”?  That heart is to serve, that heart is to understand, that heart is to have compassion, and that heart is to protect all that need protection.  It requires sacrifice, but that is the calling of professional policing and is what the public demands from us.  The Alexandria Police Department employees I have spoken to know and understand this and they are committed to these principles at many levels.  That is why the tragic death of Mr. Floyd affects many of them so deeply.

The Alexandria Police Department has worked extremely hard for a long time to become a professional policing agency and has been recognized as such for a number of years.  Yet, we also know we can always improve and must be receptive to making changes that make sense for us and the community.  However, we are but one part of the underlying issues raised following the death of Mr. Floyd.  I pray that America will stay focused on Mr. Floyd and the many victims of racial inequity that have come before him, so that they will not be lost again to short attention spans or the many distractions of our time. We need to do more!

The Alexandria Police Department has an annual review of the 21st Century Policing initiative implemented in May 2015 in the aftermath of the 2014 Ferguson protests. A 2019 update on those initiatives tracked their implementation. Some of those initiatives were met, but some had mixed results and some were not met.

One goal, for instance, was that law enforcement agencies should be encouraged to collect, maintain, and analyze demographic data on all detentions (stops, frisks, searches, summons, and arrests). APD noted that “some of this data is available e.g. arrests, and some of the data is not e.g. detentions.”

Another recommendation was refraining from “requiring officers to issue a predetermined number of tickets, citations, arrests or summonses, or to initiate investigative contacts with citizens for reasons not directly related to improving public safety, such as generating revenue.” The APD said in the update that the department uses counts of tickets, citations, arrests etc to assess what officers are doing during their shifts, but that there is no quota system.

“APD does not use a quota system and has reviewed its officer performance measures to ensure that quotas are not a part of the performance evaluation process,” the department said. “This process will be an ongoing effort by APD to ensure the perception noted in the recommendation does not exist.”

The only area of the 21st Century Policing initiative identified as not being met is the recommendation of implementing body-worn cameras. According to the review:

The only 21st Century Policing recommendation which is not being addressed by APD at this time involves APD officers wearing body worn cameras. APD is not opposed to the use of such cameras. However, a costing analysis has indicated it would cost the department in excess of $1 million a year to operate a body worn camera program. The largest cost driver is the data storage requirements under current Virginia law. Current law requires this type of data to be retained for six years following the date of the incident. There are also high personnel costs related to the management of the data

APD is aware this market is becoming more competitive which may result in the cost reductions due to technological enhancements in the industry. APD will continue to assess these developments to determine if cost reductions may make it feasible for the department to implement camera technology.