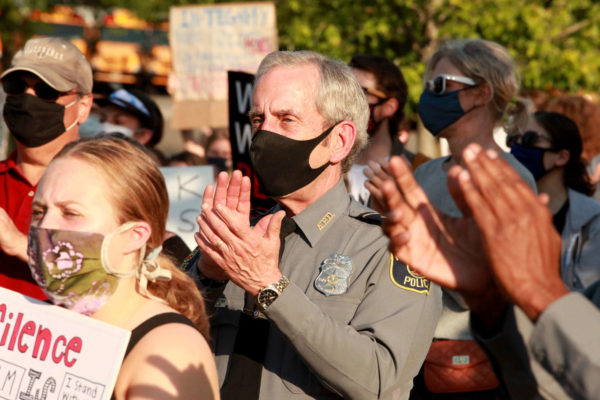 Representatives of Alexandria’s law enforcement community, in a Monday night Zoom meeting, said they welcomed a closer look in order to eradicate systemic racism in their respective departments.

Police Chief Michael Brown and Sheriff’s Chief Deputy Shelbert Williams discussed the work that their departments have done over the years and in the wake of the death of George Floyd at the hands of the Minneapolis Police. Mayor Justin Wilson also chimed into the conversation, which was moderated by city’s racial and social equity officer Jaqueline Tucker.

The meeting was requested by activist Tiffany Flowers, who tweeted to Mayor Justin Wilson about opening an online conversation regarding policing in the city.

“I felt like protesting wasn’t just enough,” Flowers said. “I felt like the best way to go about getting this reform that we’re seeking is to start reaching out to our city officials, and I just want to thank the city of Alexandria for being so helpful.”

Earlier this month, the city council unanimously passed a proposal by Councilman Mo Seifeldein to create a police review board.

“I think time will only be test of this, but what I sense is the courage in the community to deal with some of these issues,” Wilson said, adding that new laws going into effect on July 1 will add more equity to arrests made. “Those are changes that relate to marijuana, those are changes as it relates to shoplifting that really add more equity and will change the way that public safety addresses these crimes. I think these are long overdue changes and will help address in some ways some of the disparities that we see.”

A recent report from the Alexandria Gazette, for instance, found that Black males in Alexandria are arrested far more frequently than anyone else.

Brown said the department is looking at its data to find any elements of bias.

“Clearly, with the anger and the voices being heard across the country, including this city, we have to look at what we’re doing to make sure we’re doing it right and treating people with respect,” Brown said.

Williams, who is African American, said that it’s understandable that the community is angry.

“It’s tough to convince people that we’re doing what we need to do as law enforcement officers, to be fair, to understand that everyone’s human beings, and we should be treated with that same respect that we ask,” he said. “And with our officers, we’ve done that, in my opinion.”

Brown said that his department is currently 20.4% female, and the staff are 66% white, 18% African American, 5% Asian, 12% Hispanic and 2% other. He added that police are using tactics to deescalate situations, like a recent barricade situation in Potomac Yard, where a African American woman allegedly fired a handgun at officers from her home.

“Our folks used considerable restraint… in allowing the person eventually to get to the point where they fell asleep and were taken into protective custody without issue,” Brown said.