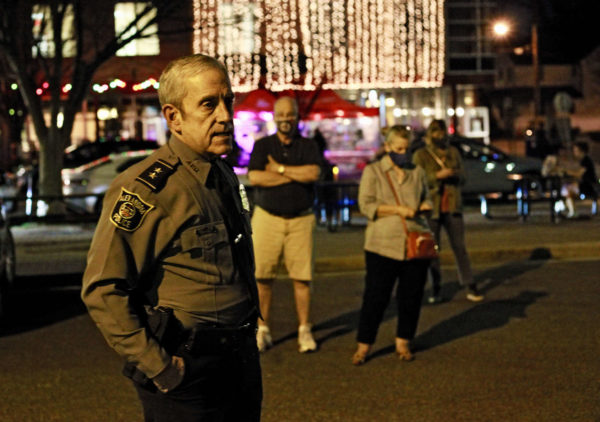 Indecent exposure, smash-and-grab robberies, and speeding on side streets were just a few of the topics fielded by Alexandria Police Chief Michael L. Brown on Thursday night in Del Ray.

Brown spoke to a handful of residents at Pat Miller Neighborhood Square on Mount Vernon Avenue, and said that police have identified a suspect in an incident that occurred last year. The suspect has been arrested in Fairfax County, and police are working to see if he is connected to the 10 indecent exposure incidents in Del Ray since last year.

Brown could not confirm if that person was back on the streets.

“We’re actively working on it, and we have made at least one arrest,” Brown said. “And we are working on the process. We’re trying to connect the dots on on some of these cases.”

“We are working aggressively,” Brown said. “We may have some persons of interest in those particular cases.”

Residents also complained about speeding on side streets, and Brown confirmed that there is a rise in speeding around the city. He also said that Alexandria Police will soon test automated speed enforcement in school zones and construction zones, which was approved last year by the General Assembly.

ALXnow has since reached out to the police for more data on speeding, driving under the influence and other traffic-related incidents.

“Our traffic safety section is fully operational during traffic all over the City of Alexandria,” Brown said, adding that the speed enforcement technology will be implemented in troublesome areas. “I will tell you some of the speeds people we’re stopping for during the pandemic were extraordinary. I mean, 65 miles an hour down Duke Street.”