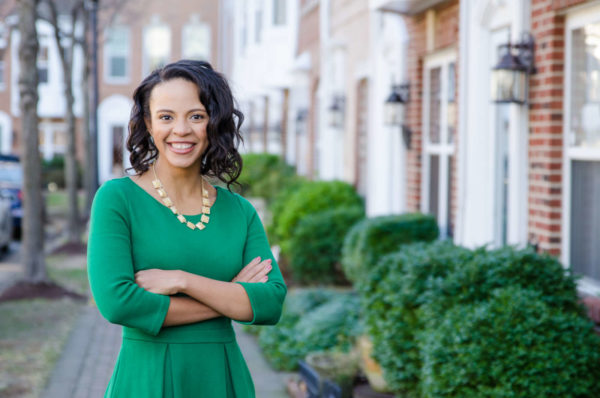 Over the next few weeks, ALXnow will be interviewing the various candidates for City Council participating in the Democratic Primary on June 8.

In a City Council race with some controversial entries: Alyia Gaskins’ candidacy is almost conventional in comparison.

Gaskins, a public health strategist and urban planner, is running for City Council on a platform of improving transportation infrastructure, closer collaboration with schools, and greater public access to city decision making after years working in local non-profits and working in city government.

Gaskins, a former member of the Transportation Commission, said her experience there with the Seminary Road bike lane controversy convinced her that the city needs to do more work in outreach to local communities, though she ultimately voted in favor of the road diet.

“What I saw in terms of the data when I reviewed the questions and our goals in terms of where we wanted to go… I supported endorsement of Seminary Road diet,” Gaskins said. “I will also be honest — I had not engaged as much as I would have liked with community around concerns and frustrations.”

Gaskins said with new large transportation projects coming up, like the Duke Street Transitway, the city needs to learn from past mistakes and controversies.

“We need to find new ways of engaging people,” Gaskins said. “Every decision can’t end like seminary road. I just spent three hours on Monday walking with a person in the community who is very worried about what [the Duke Street Transitway] means. It not only changes the street, but brings additional density, and what does that mean for Duke? Everyone in our City Council should be walking the streets with the neighbors. What are some of our hopes for this and how do we make sure it’s not just a cookie cutter project.”

One of the biggest flashpoints over the last few years in Alexandria has been the topic of density, though Gaskins said she doesn’t agree with how the narrative is generally framed.

“Right now, the conversation around density has been ‘are you for or against it,'” Gaskins said. “Density itself is not the problem or the solution — we need to talk about how we grow or develop. On the Council, it’s about taking up those questions, not just density for density’s sake. What do we get out of it? How do we ensure we get more than just a handful of units?”

The city has recently started pushing for mandatory affordable housing contributions from developers.

Additionally, Gaskins said the City Council can do more to help the city’s youngest residents and their parents.

“When we ask about schools, we often forget about youngest learners,” Gaskins said. “As a new mom, when we were searching for childcare, there was an 18 month wait. I want to figure out what can be done to increase childcare seats for 0-3 [years old].”

As the city figures out what a post-pandemic government looks like, Gaskins has been a vocal advocate for expanding access to public meetings. In a letter to the FOIA Council, Gaskins argued that the state should remove limits on electronic participation in meetings.

“Over this year, we have learned how effective it can be for people to participate in meetings virtually,” Gaskins said in the letter. “I urge you to vote this year to remove any state-level limit for how often a member may participate electronically and to allow public bodies to to address any subject during emergency electronic meetings. I would also like you to study in 2021 how there can be further increased flexibility for meeting electronically even when there is not an emergency.”

Gaskins also argued that one of the other lessons of the last few years is continual engagement with communities, not just when there’s a new project or development coming into the neighborhood.

“The biggest issue is: A lot of people don’t feel heard and they don’t feel like they have an opportunity to be involved in the decision making,” Gaskins said. “We shouldn’t just have engagement when it’s time for a big project. It can’t just be when we’re making a decision about a road diet, it has to be a constant conversation. People go to meetings and then don’t know what happened with their feedback. There are ways we can reach people differently, if anything the pandemic has showed us that. We’re not going to have the same kinds of public meetings we had before. How are we going to reach folks who can’t come to the City Council?”