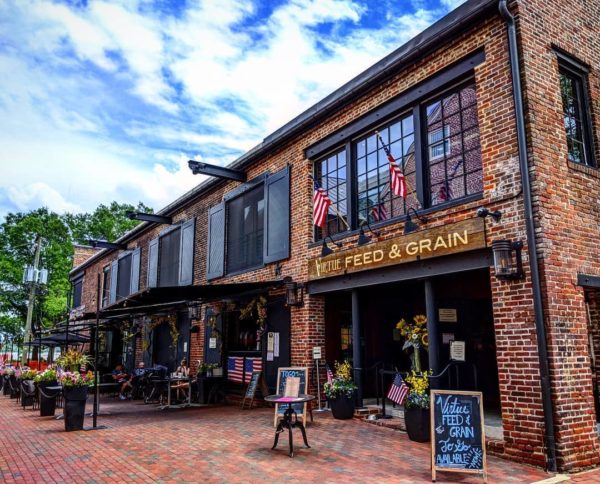 Old Town waterfront restaurant Virtue Feed and Grain could make a recent its outdoor dining expansion permanent if the closure of a nearby alleyway by the waterfront goes through.

At the Planning Commission meeting on Tuesday, March 2, the city is putting forward a proposal to close Wales Alley between S. Union and Strand streets to vehicle traffic.

According to the staff report, the closure would allow Virtue Feed and Grain at 106 S. Union Street to expand an outdoor dining accommodation granted last spring.

According to the report

In Spring 2020, the Virtue Feed and Grain submitted a request to use more of the alley for outdoor dining. Indoor dining was limited, and additional space was needed to meet social distancing requirements. To accommodate this request, the City temporarily closed the alley to vehicular traffic to allow the restaurant to expand further north into the alley, while maintaining pedestrian access along the north side. This expansion was approved through the City’s temporary outdoor dining program that was created to allow for additional dining space in the public right of way. The concept of closing this portion of Wales Alley had also been discussed prior to the pandemic as a way to provide additional pedestrian space and more connections to the Waterfront.

The report notes that the city would continue to own the alleyway, but would operate licensing agreements for its use with nearby business owners. Staff also said that, in addition to helping a local restaurant, the closing would help further advance plans to increase pedestrian access and circulation around the waterfront.

“This portion of the alley does not provide any significant benefit to traffic circulation,” the report said. “By eliminating vehicles from this area, more space is provided for pedestrians and reduces conflicts.”

Staff recommended approval of the closure in the report.

Photo via Virtue Feed and Grain/Facebook