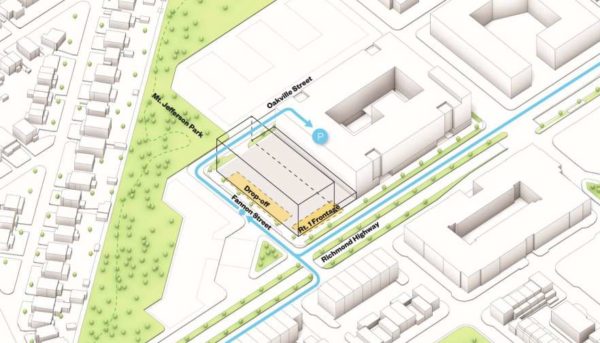 Shortly after the City Council approved overall plans for the new Oakville Triangle, developers are coming back to the city next Tuesday (Dec. 5) with specific development applications for various pieces of the development.

In a report, staff recommended approval of the creation of four development blocks and easements to start laying out the road network.

“Staff recommends approval of the requested Development Site Plan (Infrastructure Plan) with a subdivision to create the development parcels, open spaces and the required streets and a vacation of portions of right-of-way on Oakville Street, subject to compliance with City codes, ordinances and staff recommendations,” city staff said.

The second application is for the Inova Healthplex — specifically to allow construction with a parking reduction and an illuminated sign higher than 35 feet above ground, modifications to the tree-canopy requirement, and an exception to height-to-setback requirements. Staff recommended approval of the development special use permit (DSUP).

The third permit request being heard at the Planning Commission meeting is for the creation of two multifamily units being built on the development parcels in the first application.

“The applicant requests approval of two Development Special Use Permits with site plans and modifications, and associated Special Use Permits,” staff said in a report, “including encroachments into the public right-of-way for building canopies, in order to construct two multifamily buildings at approximately 715,000 sf (square feet) with 577 units and 55,000 sf of ground floor retail, site-wide landscaping, streetscape and infrastructure improvements, as part of the Oakville Triangle Phase 1 redevelopment.”

If approved at the Planning Commission, the applications would move forward to the City Council at its Jan. 23 meeting and the applicant would have until Jan. 24, 2024 to start construction.