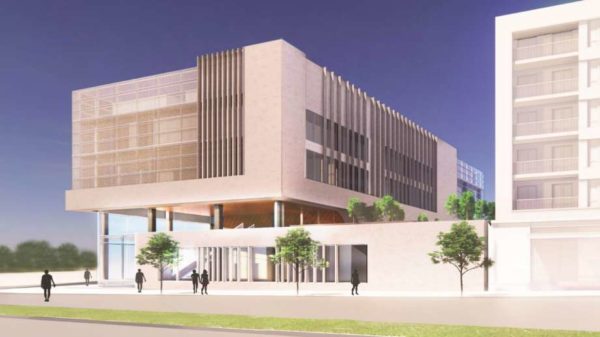 New plans for the Oakville Triangle received an overwhelmingly positive reception from the City Council at the public hearing on Saturday and unanimous approval.

Plans for the Oakville Triangle include a new Inova HealthPlex and other land use changes. Plans presented to the City Council show dramatically scaled back retail and office space in the area compared to what was approved in 2015.

“You’d rather have less retail than empty retail,” explained developer Doug Firstenberg at the meeting. “I think we’ve sized it and still bring a good mix of uses.”

The plan also includes an expansion of Mount Jefferson Park and improvements, a move praised by City Council members.

“This plan is so much better than the 2015 plan,” said Councilwoman Del Pepper. “I like the park. I like the way it’s situated. It makes it more of a usable park and it’s such a plus. And of course we can hardly let go of the fact that the health care [center] is going to be moved there. All these things will not only help the community but help development up and down Route 1. This is really a terrific change. I felt like we had a whole new project here and it’s so superior to what we had.”

Duncan Blair, an attorney representing the applicant, said projects within the development will be back in January for special use permits and infrastructure.

“The goal is to have this project under construction quickly,” Blair said.