There have been three more deaths due to COVID-19 in Alexandria, and the Virginia Department of Health is anticipating more than 20,000 additional cases statewide by Thanksgiving.

There are or have been 3,977 cases in Alexandria, according to the Virginia Department of Health. There have also been 322 hospitalizations since the first case was reported on March 11.. The Alexandria Health Department says that one in 12 infected residents has been hospitalized.

Across Virginia, there have been 3,344 deaths and there are or have been 156,649 cases of the virus. There have been 2.2 million PCR (polymerase chain reaction) tests and the state’s seven-day positivity rate is at 4.8%.

The University of Virginia’s weekly COVID-19 model on the VDH website is projecting a rise in the number of cases with the onset of flu season. The model uses an “adaptive fitting methodology” with past and current trends and “what-if” scenarios.

“The new model also includes two ‘what-if’ scenarios to predict what we might see if cases increase in response to seasonal effects, such as schools re-opening and changing weather patterns,” according to the weekly updatel. “These ‘what-if’ scenarios assume a 10-20% increase in transmissibility beginning with the onset of flu season. The model will be updated regularly to incorporate new information… If we continue on this trajectory, we would expect 178,597 total confirmed cases by Thanksgiving.”

Latino residents are the hardest hit with 1,846 reported cases, followed by Black residents with 824 cases, white residents with 783 cases, Asian or Pacific Islander residents with 143 cases, 90 cases classified as “other” and four native American cases.

There are or have been 2,067 women (with 37 deaths) and 1,897 men (with 36 deaths) in Alexandria with the virus. The only age groups that have not experienced a death so far are children and teenagers. 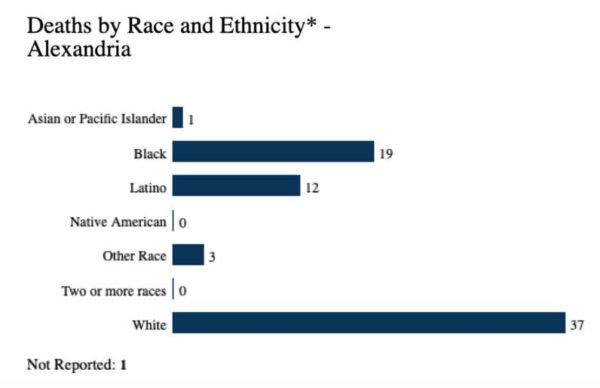 There have been 43,205 COVID tests administered in the city so far and 4,910 antibody tests. The city’s seven-day positivity rate is now at 3.9% and has been under 10% for four months. 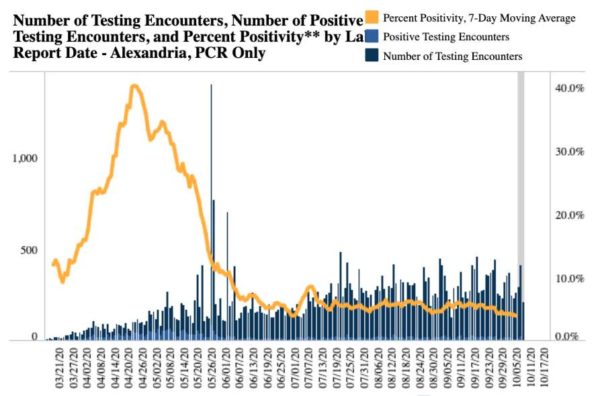