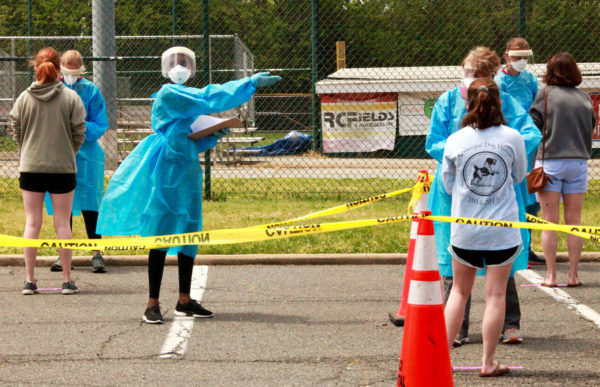 After extensive drive-thru and walk-up testing at the height of the COVID-19 pandemic, Alexandria is preparing to shift the focus toward taking testing to the city’s heavily impacted communities.

Mayor Justin Wilson said in the last of his weekly town hall meetings yesterday (Thursday) that he spoke to the Virginia Secretary of Health’s office about shifting the focus of testing.

“We pitched targeted testing in communities, neighborhoods and populations,” Wilson said. “Part of the idea was getting away from mass testing events which ultimately yield a wide array of people but didn’t yield a lot of positive tests. We’re going to try to bring testing to the populations where we know there’s the spread of infection in the community. The state has been favorable to that proposal.”

Arlandria has been a hotspot of coronavirus. In May, nearly half of the city’s coronavirus cases were in the Arlandria and Potomac Yard Zip code of 22305. Wilson said most of the cases in Alexandria have been from community spread.

Positive testing has gone down to near 5%, down from the 20-30% positive testing rates earlier or 50% rate in targeted testing in Arlandria. Part of that has been increased testing capacity yielding a lower percentage of positive tests, but Wilson also noted that overall social distancing has led to a fairly low rate of virus reproduction.

“Today, Virginia looks pretty good,” Wilson said. “Only three states have a lower rate of virus reproduction. We’re under one, which means each person infected is infecting less than one other person. That means isolation is working and people are taking the precautions they’re supposed to take… We have to keep that up to prevent us from going back the other way.”

While Alexandria’s long-term care facilities represent a relatively low number of cases, Wilson said they have seen a disproportionately high number of deaths.

“Out of 50 deaths in the city, 22 have come from one of three long-term care facilities,” Wilson said. “Overall, they account for an overall low percentage of cases. Most are from community spread. But those are areas that have been hit rather hard.”

The city is preparing to move into Phase 3 of reopening next Wednesday, which Wilson said will likely be a more modest change than the two earlier phases of reopening.

“This allows restaurants to increase capacity, allows entertainment venues to come back at 50% and gyms can come back at 75% capacity,” Wilson said. “After Phase 3, there is no clearly other defined phases.”