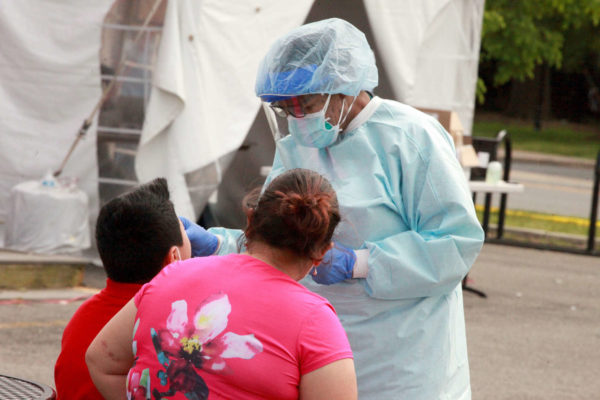 Alexandria’s Hispanic population has the most number of COVID-19 infections, and on Saturday hundreds of residents in the city’s Arlandria neighborhood got free COVID-19 tests.

The tests were provided by the community health nonprofit Neighborhood Health, which partnered with the city for the event and tested 236 residents. Neighborhood Health will receive the test results from LabCorp within 48 hours of the testing and then reach out to the residents.

Neighborhood Health Executive Director Dr. Basim Khan says it is too early to open Northern Virginia, and that the May 29 reopening deadline be pushed.

“It’s still getting worse,” Khan told ALXnow. “Cases still rise, the percentage positive is still high, hospitalizations are still going up. That’s an important point that people don’t talk about. There are more people in the hospitals and I’m in Northern Virginia today than they were yesterday or the day before. As long as those indicators are going up, I don’t think we’re ready to reopen.”

According to available information, the city’s Hispanic population leads with positive cases at 702 cases, 70 hospitalizations and four reported deaths. In the 22305 ZIP code, which includes Arlandria, Potomac Yard and the Potomac West neighborhoods, there are 431 cases (with an estimated population of 16,095).

City Councilman Canek Aguirre was one of the dozens of volunteers on Saturday, and agreed that more tests needs to be brought to Arlandria.

A family of seven got tested because one family member felt sick.

“My brother doesn’t feel good, so we all got tested just in case,” said a resident. 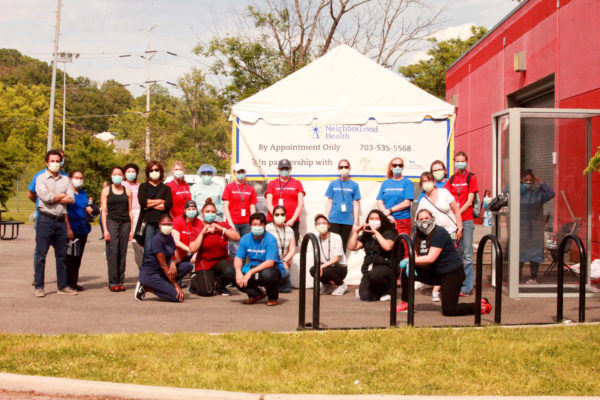 Neighborhood Health plans on ramping up testing in Arlandria in the days ahead, Khan said. No dates of other free testing events have yet been released.

“Our plan is to continue to ramp up testing as much as we can,” Khan said. “People who test positive, if they don’t have a source of care, we’re gonna expedite them into care so that someone can actually take care of them, and then all the support that goes along with that. It’s monitoring them clinically to make sure that they’re doing okay.”

Khan added, “There needs to be aggressive testing. That’s why we set up the site in the first place. The whole purpose of this was because we knew that in our patient population was predominantly low income, that there will be a higher percentage of patients who tested positive. One reason that we do know that there is a high percentage of people testing positive is because of the testing that we have done until now. So, our plan is to aggressively try to ramp up testing, both in this low income community but also in other low income communities in Northern Virginia, and that means in Alexandra, Arlington and Fairfax County.”