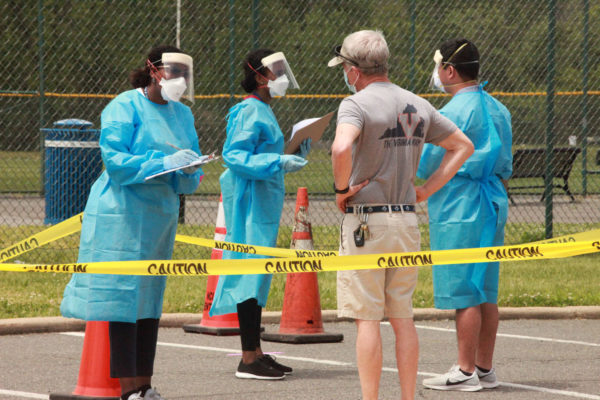 After a new surge of 3,000 tests performed earlier this week, Alexandria now leads the region in per capita testing, Mayor Justin Wilson said in his weekly virtual town hall on Thursday.

Wilson warned that the results of the increased testing would result in more, after the thousands of tests were administered at Cora Kelly School and Landmark Mall on Monday. Alexandria now has 1,941 cases of COVID-19, an increase of 54 cases since yesterday, according to the Virginia Department of Health.

“We had great turnout at both sites,” Wilson said. “Those tests are starting to hit the data on the VDH website.”

There have been more than 20 deaths and 1,000 new reported cases of COVID-19 in May alone.

Wilson said that many of those who came for testing were not Alexandria residents, and that their information will be relayed on VDH data for their own jurisdictions and not in Alexandria. It is not clear how many city residents were tested on Monday.

Wilson said 5.2% of the Alexandria population has been tested for COVID-19, higher than any other jurisdiction in Northern Virginia.

But while testing is going up, Wilson echoed the sentiment of many community leaders in saying that more testing is needed in areas like Arlandria, which has the second-highest infection rate in the city.

“We still have a lot of work to do to continue testing — particularly in some of our harder hit communities,” Wilson said.

Wilson also argued that it’s not enough to simply give someone a test, which is why the city has been working with organizations like Neighborhood Health. Wilson said those partnerships will continue as the pandemic progresses and the state moves through a phased reopening.

Some local residents asked Wilson during the town hall why Arlandria was so hard hit by the pandemic. Wilson pointed back to the Community Health Assessment & Improvement Plan published last year, which highlighted a preexisting racial disparity in access to medical treatment. The Assessment noted greater instances of diabetes, obesity and hypertension in many minority and immigrant communities and said those same factors were at play in the spread of COVID-19.

As the city continues to plan for more testing, Wilson encouraged those with any medical training to sign up for the Medical Reserve Corps to volunteer during the response to the pandemic.

Meanwhile, Wilson said Inova Alexandria Hospital is currently at 63 percent capacity, which is down from the worst of the pandemic. He als said the hospital has a capacity of around 310 COVID-19 patients, and as of yesterday had 41 patients.