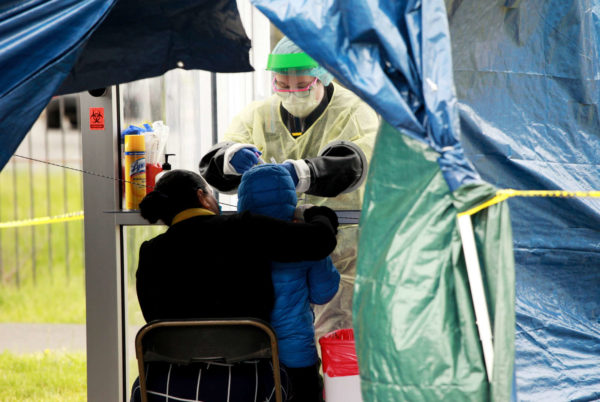 Dr. Basim Khan and community health nonprofit Neighborhood Health have been on the frontlines of the coronavirus pandemic in Arlandria, the neighborhood with the highest number of positive tests.

Khan spoke to the City Council yesterday (Tuesday) about the progress, and challenges, for testing and providing healthcare options for Arlandria residents.

“It’s grown quite a bit, and we expect it will increase more,” Khan said. “We are testing every weekday in Arlandria. Our goal is to make it as quick as possible for patients.”

Khan said there are opportunities to isolate and reduce the spread of the virus, which he said has been heavily concentrated in Alexandria’s low-income communities, but that means being able to isolate and treat patients.

According to available information from the Virginia Department of Health, the city’s Hispanic population leads with positive cases at 553 and four reported deaths. As of yesterday, the area of the city with the leading number of cases is the 22305 ZIP code, which includes the Arlandria, Potomac Yard and Potomac West neighborhoods, and as of Tuesday had the largest number of reported cases at 370, with an estimated population of 16,095 residents.

“We’re trying to ramp up testing as aggressively as possible,” Khan said, “but we’re not just testing, we’re assuming responsibility [for the patients].  If we just tested them and said ‘bye’ that wouldn’t be a good service.”

Khan said those aren’t the primary roles of Neighborhood Health, but in these circumstances, it’s all hands on deck.

Dr. Stephen Haering, Director of the Alexandria Health Department, said that he is hoping that as Virginia prepares to hire more contact tracers, they will hire some from Alexandria.

“I’m hoping to get contact tracers hired from Alexandria, not just because they know the languages like Spanish or Amharic, but they know the communities,” Haering said.

Councilman Canek Aguirre agreed that part of combating the virus in Arlandria is overcoming an English proficiency barrier.

Haering also said the Health Department has been asking those with coronavirus to do some of their own contact tracings, reaching out to people they may have come in contact with over the last few days because the current contact tracers are currently overwhelmed.

Aguirre also noted that when he travels around Chirilagua, nearly everyone he sees is wearing a mask, but walking near the waterfront in Old Town there are tons of people without masks. Councilwoman Amy Jackson attributed this in part to a lack of police officers or city officials present to encourage masks and social distancing.

“We need to see police officers on the streets, in Old Town,” Jackson said. “We need law enforcement, just a few, down there actually being present and accounted for — being there to help and assist. If we don’t have those people there to do that, we’re going to run out of time. It’s going to be summer, and it’s going to be a free for all.”

END_OF_DOCUMENT_TOKEN_TO_BE_REPLACED

More Stories
BREAKING: Another COVID-19 Death in Alexandria As Cases Surpass 1,300 MarkAsk McEnearney: How is Real Estate Evolving in Alexandria?