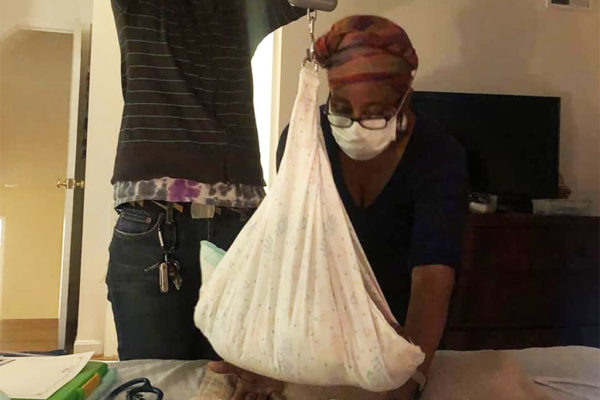 When the pandemic hit in March, many mothers late into their pregnancies who were preparing to give birth in a hospital were left with difficult decisions.

For BirthCare & Women’s Health, a midwife service in Old Town, that meant a new wave of parents looking for alternatives.

“We’ve had a real influx of people in March — a lot of calls and people transferring in who were afraid to go to the hospital,” said Marsha Jackson, certified nurse-midwife and owner/director of BirthCare & Women’s Health. “There was so much that wasn’t known about COVID-19. Every day there was a change so people were uncomfortable going to the hospital… We have had more interest in home births.”

BirthCare & Women’s Health has been around for 33 years, opening as a home birth practice in 1987, and, four years later, expanding into a free-standing birth center at 1501 King Street in Old Town. The center provides an alternative to giving birth in a hospital, whether that means sending a midwife to a home to help a mother in her delivery or bringing her to their facility.

Jackson said the advantage of home births or births at the BirthCare & Women’s Health is that women can deliver their babies where they feel more comfortable and relaxed.

“One of the benefits has been families who are now pregnant or considering pregnancy are really closely looking at all of their options — and really considering having home or birth center birth,” Jackson said. “If she’s a healthy woman having a normal pregnancy, the safest place for her to give birth would be a place where she feels comfortable and safe. That place is oftentimes in her home.”

When the pandemic started, Jackson said her company also offered the benefit of not having mothers share a facility that was also treating a COVID-19 outbreak.

“We had to do a lot of screenings very quickly,” Jackson said. “We had a couple of clients transfer in [that] were due to have their babies in two weeks. We were able to get everything in place… One family had a baby within a week of their first visit.  The mom went into labor in the next couple of days and had the baby, and it was wonderful.”

Work at BirthCare & Women’s Health changed as well. Appointments were spaced out to avoid unnecessary contact between patients and the facility started using more telehealth for prenatal visits — but in-person visits and births continued.

“We wipe our bags more than we used to when we go to the homes,” Jackson said. “When we come, we have a couple of suitcases with supplies and equipment. We sometimes put down a surface where we put our bags on the floor. One of the things we found out: a lot of the things we’ve instituted to make sure things are sanitized — we were already doing that. Whatever we took out of the bags, we sanitize with alcohol or wipes before replacing them in our bags.”

The facility also limited the number of people present for births to ten: including the midwife and doula, but not including the baby. One of the biggest changes was asking visitors to a birth to self-isolate for a week before attending.

Even as Alexandria starts reopening, Jackson said she’s starting to see more mothers comfortable going back to hospitals, but that the service is still busier than it usually is.

“Our May census was full,” Jackson said. “Our census in August is full. A lot of that is due to COVID-19. In April, our census picked up. Before COVID-19 our numbers were a little down.”

Jackson said even as some parents are returning to plans to give birth at a hospital, the pandemic did put home births back into public awareness for prospective parents.

“A lot of the families that may not have considered the option for home births now are considering that,” Jackson said. “Our census for January is filling quickly. We limit clients to  20 per month, and we’re already more than halfway there. That’s early for us, to be almost full for that month.”

END_OF_DOCUMENT_TOKEN_TO_BE_REPLACED

More Stories
School Board to Address T.C. Renaming This FallAsk McEnearney: What Can I Do To Make My Home More Attractive to Millennial Buyers?