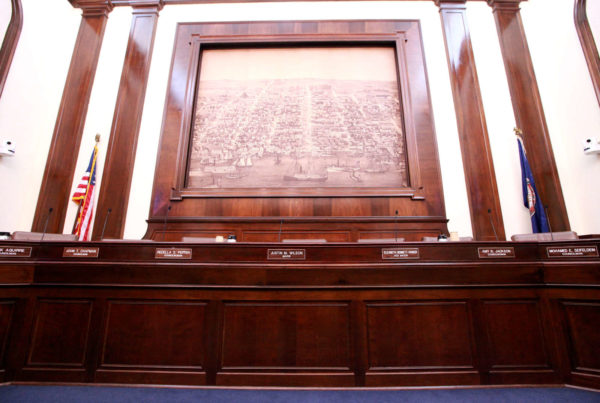 At the end of an exhausting emergency budget cycle, the City Council praised the work of staff for throwing together a $753.3 million fiscal year 2021 operating budget that fills a steep funding shortfall without curtailing city services.

In a 45 minute Zoom meeting, the City Council unanimously approved the budget with little discussion, following a week without any additions or deletions.

Mayor Justin Wilson said the City Council didn’t receive a lot of feedback during the budget process, which was conducted almost entirely online over the last few weeks, and that he believed it meant the community understood what was at stake.

“The cavalry’s not coming,” Wilson said. “There won’t be a big check that lets us cure all our problems. This is very much a stay-at-home budget. This is a budget that hunkers down and waits to see what the environment is like over the next couple of years.”

Wilson said Alexandria was fortunate to avoid some of the deeper, more damaging cuts cities are facing like in Nashville, Tennessee. He also noted that this will be the fourth year without a tax rate increase and the first negative budget since the recession.

The slashed budget came at some cost to city employees and city planning. City Manager Mark Jinks’ scaled-back budget nixed earlier pay increases planned for city employees and eliminated plans to hire many new positions. On the capital side, the redevelopment of T.C. Williams High School and several waterfront projects are being pushed back.

Specifically, the budget is 5.8% lower than the $800 million operating budget Jinks proposed before the COVID-19 pandemic, and includes $46.6 million in cuts to the operating budget and $140.6 million in the capital budget. It closes a nearly $100 million shortfall by implementing a city staff hiring freeze, and holding off on a number of capital projects.

Jinks also proposes reducing the transfer to the Alexandria City Public Schools system by $7 million, equating to a 2% staff bonus, merit step increases and a 1.5% decrease in the employee contribution to the ACPS supplemental retirement plan. The proposed Capital Improvement Project budget has been sharply reduced from $2.1 billion, and while the T.C. expansion at the Minnie Howard campus is delayed, the in-progress plans to renovate MacArthur Elementary School will proceed.

“This was an extraordinary year,” said Councilwoman Redella “Del” Pepper. “It was quite amazing our city manager was able to turn this around. I don’t know how long it is from one budget to another, but it seems like two weeks. That spoke well for him and his department. We can’t see them here, but they ordinarily look exhausted by this point. I’m really very impressed.”

Pepper referenced an op-ed in the Alexandria Times praising the new budget, saying it was representative of feelings in the community-at-large that staff had stepped up to the plate under extreme circumstances.

Jinks said all praise was due to department heads who submitted their own budget cuts and to the fiscal policies of previous councils.

“We were able to have not a budget of gimmicks, rubber bands and duct tape holding it together, but a sound structure able to hold it back and look at where we can make reductions,” Jinks said. “There are dreams we had to defer. It hurt not to put forward the employee pay increase, but compensations are the biggest part of the budget. I appreciate that employees understood that’s what we need to do.”