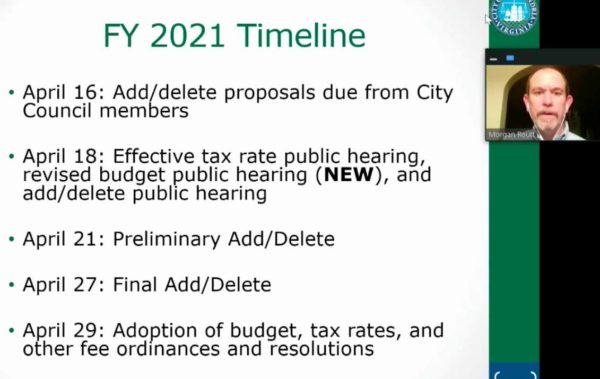 The City Council reviewed a substantially cut-back $753.3 million fiscal year 2021 operating budget at its meeting Tuesday night, and are now working through a months-long process that must be approved by April 29.

There were few budget surprises at the meeting, as the information was presented last week. The budget is 5.8% lower than the $800 million operating budget Jinks proposed before the COVID-19 pandemic, and includes $46.6 million in cuts to the operating budget and $140.6 million in the capital budget.

The budget will close an anticipated $92.2 million shortfall, and includes a hiring freeze, a drastic reduction in capital projects, and reverses a decision to increase taxes by 2 cents.

City Manager Mark Jinks and Budget Director Morgan Routt walked Council through the new budget, which is being finalized in a roughly two-week period starting with last night’s presentation and ending with scheduled for adoption on Wednesday, April 29.

Jinks is also proposing reducing the transfer to the Alexandria City Public Schools system by $7 million, which equates to a 2% staff bonus, merit step increases and a 1.5% decrease in the employee contribution to the ACPS supplemental retirement plan.

Additionally, the proposed Capital Improvement Project budget has been sharply reduced from $2.1 billion, and while the T.C. expansion at the Minnie Howard campus is delayed, the in-progress plans to renovate MacArthur Elementary School will proceed.

The budget revamp is being conducted at a breakneck pace that leaves the city council with only one week for the add/delete process, in which council members must not only find programs they would like funded but identify proportional cuts in other parts of the budget and get two co-sponsors. Those add-delete proposals are due tomorrow (Thursday).

This Saturday (April 18), the city is also scheduled to host a joint tax rate hearing, a revised budget hearing and an add/delete public hearing. Over the next week, the city will move through the add-delete process toward the final adoption in two weeks.

In-person participation at the April 29 budget adoption meeting at City Hall is possible, but the city is encouraging online participation.

END_OF_DOCUMENT_TOKEN_TO_BE_REPLACED

More Stories
The Spring2ACTion Fundraiser is Today, $500K Already Raised in Early GivingAsk McEnearney: What’s My Best Approach to Buy or Sell a House During COVID-19?