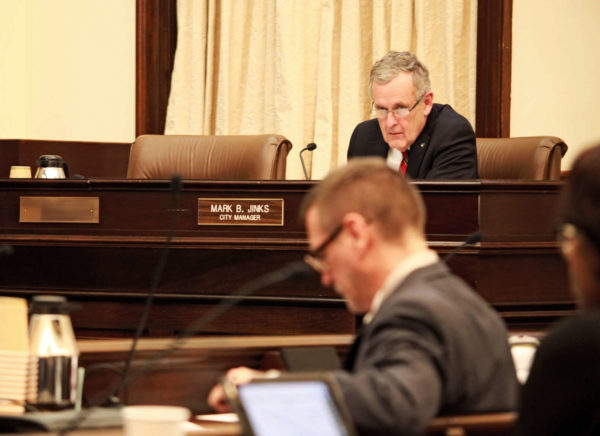 City Manager Mark Jinks says that his proposed fiscal year 2021 budget will be deeply impacted by the COVID-19 pandemic, and predicts that proposed capital investments will take a hit.

“There will be notable changes in the budget, probably I would suspect capital investments,” Jinks told ALXnow. “We’ve got projects related to city facilities, school facilities that we could do differently. Maybe we talk to Arlington about how the Glebe Road Bridge could stay up as it is for another year. Maybe it can’t.”

That could mean also mean postponing a renovation of City Hall and the construction of the expanded T.C. Williams High School campus.

The plan to construct Douglas MacArthur Elementary School is still on track, but when asked about the T.C. expansion, Jinks said, “We’ll see.”

Jinks added, “We know that next year we’ll have revenue losses, because once we get through this pandemic, and then they start to ramp up, businesses will reopen and people will get comfortable about spending again, and then we’ll get back to our normal revenue total.”

On Saturday, the city declared a state of emergency over the pandemic. There are four positive cases in the city and one Alexandria resident infected in New York City.

“The dollar total of the budget is going to need to change substantially,” Jinks said. “There’s a new reality. Hopefully, in a couple of months, everybody has taken really proper precautions, sanitized as best we can and don’t spread it, hopefully, contain it within that timeframe. In the meantime, the four functions of city government — police, fire, the jail and emergency communications are all operational and we’re all taking precautions.”

City council on March 11 capped the real estate tax rate for this year’s budget at $1.155 — potentially a 2.5 cent tax increase for residents. That means they will be unable to raise taxes above that amount in this budget cycle. City Council will adopt its budget on April 29.

On Wednesday night, the Council directed Jinks and his staff to prepare suspending the city’s dining and transient lodging tax penalties.

Mayor Justin Wilson has been in city government for more than nine years, and has talked with his regional counterparts about comparing the economic impact of COVID-19 to federal sequestration and the 9/11 attacks — put together.

“It’s absolutely surreal. I mean, this is something that we never imagined,” Wilson told ALXnow. “I think we imagined it, but just watching it play out in real time, it’s just been… Sometimes I feel like it’s a nightmare. And then, you know, you wake up.”